Hands on a Hardbody at Minneapolis Musical Theatre

Hello! It's us! Returning from hiatus to bring you a very special message about THEATER. 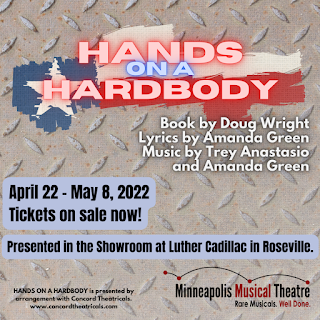 It's back, baby! May is rich with theater goodness to see and love, but we're starting off with an old favorite: Minneapolis Musical Theatre and their upcoming production of Hands on a Hardbody performed at Luther Cadillac Roseville (April 22 - May 8).

A little backstory: Although they’ve been around since 1992, Minneapolis Musical Theatre (MMT) first came on our radar with La Cage Aux Folles in 2006. Starring founders Kevin Hansen and Stephen Meerdink as Albin and Georges and performed during the Minneapolis Pride celebration, this production was pure joy.

We’ve followed MMT ever since. Their mission is ‘rare musicals, well done’ and truer words were never spoken. We’ve seen a number of fun, quirky, and heartfelt productions of musicals we haven’t seen anywhere else including Chess, Kiss of the Spiderwoman, Zombie Prom, Zanna, Don't!, Mame, The Story of My Life, Reefer Madness, Sunset Boulevard, Bloody Bloody Andrew Jackson, Eating Raoul, and YES, Carrie, the legendary flop based on the Stephen King novel.
Oh, and their 2016 production of Silence! The Musical, "an unauthorized parody of The Silence of the Lambs" was LEGENDARY (read our rave here). Featuring songs like "Are You About a Size 14?" and featuring a Fosse-inspired chorus of lambs, this show was so hilarious and spot-on, we saw it three times.
And it's not even our favorite MMT show (so far)! That honor belongs to 2018's High Fidelity, which was performed at Minneapolis beloved record store Electric Fetus. A close runner-up is the sweet two-person musical Daddy Long Legs, delightfully performed at the James H. Hill House, and one of the last shows we saw before COVID.
But enough about the past! Let's talk about a show you can actually go see!
Hands on a Hardbody is based on a 1997 documentary of the same name which depicts a yearly endurance competition in Texas that pits contestants against each other to see who can keep their hand on a pickup truck for the longest amount of time. The last contestant standing wins the brand-new truck. These competitions can last for days and takes place outside, under the Texas sun and in pouring rain.
The musical was commissioned by the La Jolla Playhouse and features a book by Doug Wright, lyrics by Amanda Green, and music by Trey Anastasio (of Phish fame) and Amanda Green. The show opened on Broadway in 2013 and closed after only 28 previews and 28 performances. Despite closing so quickly, the show was nominated for three Tony awards (including Best Score) and several Drama Desk awards.
Charles Isherwood in the New York Times described the La Jolla production as it "sings sincerely and with a rough-edged humor of the dusty margins of American life, where people live paycheck to paycheck if they are lucky enough to have a job, and chase a chancy illusion of sudden salvation if they are not." Sounds familiar, no?
We've all been through incredibly hard times the last few years, which why this show spoke to MMT Artistic Director Joe Hendren. “They’re all hoping for a better life - whatever that means to them. The characters, the music - it’s a wonderful slice of Americana that explores our shared humanity. In a word - it’s about hope.”
Thankfully, Minneapolis Musical Theater is not staging this show outside (you can't count on Minnesota weather), but at at the Luther Cadillac showroom in Roseville. In case you're worried about standing for an entire show, there are a variety of seating (and pricing) options available. You can also find content warnings and COVID policies at the website.
MMT puts on quirky, funny, and heartfelt musicals and in non-traditional venues. They provide truly unique theatrical experiences. Hands on a Hardbody runs from April 22 through May 8 and will likely sell out quickly. Get your tickets soon!
See Also:
There are a ton of fascinating articles at the HOAH Broadway website about how a truck contest became a Broadway musical written by the guy from Phish.
Check out the "Something for Nothing" episode of  This American Life, which features audio from the documentary.
For another look at an endurance contest in hard times, see the film They Shoot Horses, Don't They?" which features a Depression-era dance marathon.
Posted by Carly