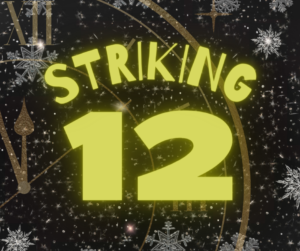 Let's be honest: We LOVE Minneapolis Musical Theatre and their mission of producing "high quality yet affordable works of musical theatre never before – or very rarely – seen by Twin Cities audiences."

Thanks to MMT, we've seen a variety of delightfully quirky and challenging musicals, and in recent years, such outstanding productions such as High Fidelity (at the Electric Fetus!), Daddy Long Legs (at the James J. Hill House!), and Hands on a Hard Body (at a car dealership!)

Minneapolis Musical Theatre kicks off their 2022-2023 season with Striking 12 (at the Gremlin Theatre from December 2-18). It's a fascinating entry into the Twin Cities holiday theater scene.

Based on Hans Christian Andersen's Little Match Girl (sort of), this musical is about "a grumpy, overworked New Yorker who resolves to spend New Year’s Eve alone in his apartment when an unexpected visitor brings some much-needed cheer." Well okay, then!

Striking 12 plays out on a bare stage, with minimal props and costume changes. The presence of strings of twinkle lights in the intimate Gremlin Theatre space is one of the only physical nods to the holiday setting. The cast play multiple roles (and sometimes instruments) and view and comment on the on-stage activity. There's a meta, self-referential feel to this musical from the very first songs, which incorporate the traditional "turn your cell phone off" messages and point out musical motifs that will reappear.

The synopsis of the show refers to the "eclectic score that combines pop, rock, jazz, showtunes, and more." It's a quite unusual musical and sent us online to learn more. Thanks, Internet! Written by Brendan Milburn and Valerie Vigoda (of the band Groovelily) and Rachel Sheinkin, whose theater credits include The 25th Annual Putnam County Spelling Bee, Striking 12 was produced off-Broadway in 2006. (It was a NYT Critic's Pick!)

Clocking in at just 80 minutes, this quirky but heartfelt musical benefits from an extraordinarily charming cast. At the center of Striking 12 is the heartfelt telling of The Little Match Girl. The story is being read on New Year's Eve by the aforementioned cranky guy. His attention to and interest in the story is touching, and the interjections from the ensemble provide commentary on the narrative.

The surrounding story is not nearly as strong as the Little Match Girl part, but the energetic and talented cast are a joy to watch even when the material is a little undefined. Each ensemble member has a unique individual presence, but easily step in and out of their multiple characters in the show. Madeline Kadlec winsomely portrays the match seller and plays the bass, which seems like it wouldn't work, but it does, beautifully. Charlie Morgan, Abigail Chagolia, and Antonia Perez alternate as narrators who have definite opinions about what happens in the story, as well as playing other roles. Nick Manthe plays the grumpy guy with relish, and Rachael Furgiuele is sweet as a modern-day analog to the Match Girl. Kyle Camay, Umar Malik and Paul Stanko (also on drums) and Laura Potratz (violin) round out the ensemble, with musical support from Josh Shaffer (guitar) and music director Jean Orbison Van Heel (keyboards).

Striking 12 is a refreshing alternative to the usual holiday shows and well worth seeing for its excellent ensemble (who we'll be definitely keeping an eye out for).

Pro tip: If you liked this show, MMT has a rare opportunity to credit your ticket purchase toward a Season Subscription. (Email them at tickets@aboutmmt.org to find out how!) The other two shows are also contemporary takes on classic literature (Faust and Othello) and sure to be must-sees.