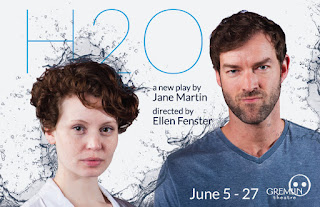 As an audience member, sometimes you just take a leap into a show you know nothing about and find out where it takes you. Gremlin Theatre's H2O was a little like that for me. In recent seasons, Gremlin's work has been consistently interesting enough to make their next show a must-see, even before reading anything about it.

The premise was intriguing: Jake, a loose-cannon movie star, decides to prove himself in a Broadway production of Hamlet. Deborah is an evangelical Christian and struggling actress who is trying to fulfill the calling she heard from Jesus in the New York Public Library.

Jake's fame entitles him to casting approval, which he uses to audition actresses for Ophelia, Hamlet's doomed love. When Deborah turns up at his apartment for the audition, she is immediately drawn into Jake's dysfunctional life. In spite of himself, Jake is fascinated with Deborah and her firm beliefs, while she sees the prospect of a high-profile job and perhaps the possibility of saving a soul along the way. 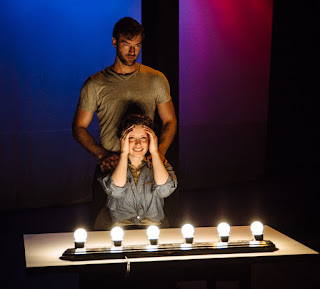 Everything about director Ellen Fenster's production, from the costumes and lights to the four "essentials" who smoothly facilitate costume and set changes, keeps the focus on the characters and their ideas. The two speaking roles are brilliantly inhabited by Peter Christian Hansen and Ashley Rose Montondo. Jake and Deborah are both changed by the relationship, which is clear in the terrific script by Jane Martin as well as in the performances.

Although the play is quite intense, deals with some very deep subjects, and refers quite a bit to the script of Hamlet, it is also very funny. H2O is a new play, which premiered in 2013 at the Contemporary American Theatre Festival in West Virginia and was hailed as a "masterpiece" by the MD Theatre Guide. We are very fortunate to experience this new piece in such an exceptional production. Although the play runs just 90 minutes, the impact reverberates long after the show ends.
Posted by Jules