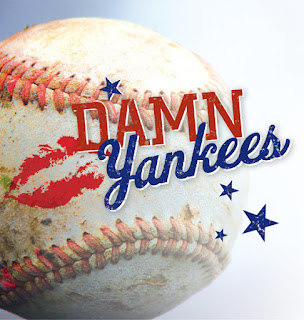 There are so many things to love about Damn Yankees at the Ordway--where to start?  First of all, go see it now as it runs only through June 28th, which is shockingly short for such a great production.

Did you go buy tickets? I'll wait here. Let me know when you're back.

Got 'em?  Great! In a nutshell: Damn Yankees is a variation on the Faust legend and has a middle-aged baseball fan selling his soul (to "Mr. Applegate") for a chance to play on his favorite team (the Washington Senators) and the chance to help them beat those "damn Yankees."

Damn Yankees is a truly classic musical, first running on Broadway in 1955. With music and lyrics by Richard Adler and Jerry Ross, Book and direction by George Abbott, and choreography by one Bob Fosse, this was a follow-up to The Pajama Game, which featured much of the same creative team.

(BTW, did you know there's a longtime jinx about shows dealing with baseball and Damn Yankees broke it by being a hit?  True story.  I learned it from Stanley Green, who knows everything about Broadway Musicals.)

The Ordway's production is a sure-fire hit. It's an absolutely delightful evening of magical musical theater that features a cast of local favorites and some marvelous new faces. It's a fabulous production, just as their production of A Christmas Story was last year, and I love the trend of these amazing homegrown productions that feature and employ such amazing local talent. Yay!

Above all else for me, though, what stands out for this show is the wonderful cast.

Lawrence Clayton (as middle-aged Joe Boyd) and Thay Floyd (as young Joe Hardy) not only have gorgeous voices (I mean, GORGEOUS, in ways I am not qualified to explain), but they both have chemistry for days with Meg Boyd (the wife Joe leaves behind to play baseball, played beautifully by Ann Morrison). Their relationships are realistic and touching and provide a whole lot of heart.

Speaking of heart, a local triumvirate (I just really like using that word) of talent is included in the Washington Senators: Dieter Bierbrauer, Randy Schmeling, and Reid Harmsen. Add in Allen Fitzpatrick as the coach Van Buren, and from the second number ("Heart"), it's clear this is going to be a standout production. I love when a well-known number is performed so skillfully and so authentically that it feels like a whole new song. And I could watch Randy Schmeling and Dieter Bierbrauer sing together all day any day. They knock "The Game" out of the park. (That is a baseball reference, right?)

On the evil side of things, Monte Riegel Wheeler plays the hell out of Mr. Applegate. You can not take your eyes off him, and he adds a whole other level of humor to his material. He's so over-the-top, but it works perfectly. (He wears a few red suits to death as well).

His handmaiden Lola is played by Tari Kelly, who came through town a few years ago in a tour of Little Shop of Horrors, in which she was a vulnerable and sweet Audrey (far better than Kerry Butler, who had just played it on Broadway). Every inch of the role of Lola has Gwen Verdon written all over it, but Kelly gave it her own spin and welcome depth.

Oh my gosh, and I haven't even mentioned Kersten Rodau as the publicist Gloria Thorpe, with her amazing voice, which feels utterly effortless, or Regina Marie Williams, who makes the most of the wit and charm in her role as Sister, or the adorable Mario Esteb as Joe's Fan Club.

In case I didn't mention it before, this is a terrific production that also happens to feature a racially diverse cast. There's a fascinating Casting Note in the program about the casting of African American males in the lead roles, and the interracial marriage of Joe and Meg. The Ordway continues this conversation with displays in the lobby that feature the integration of baseball, including a few local ball clubs, as well as featured talkbacks.

Beautifully done, Ordway. Can't wait until your next production!
Posted by Carly