Shakespeare for All - Twelfth Night by Mu Performing Arts

Mu Performing Arts' new production of Twelfth Night, playing through June 14 at Mixed Blood Theatre, is a must-see. I repeat, a must-see.

As adapted and directed by Mu's artistic director, Randy Reyes, it's a whirlwind 99 minutes of music, laughs, love, and mischief.

Twelfth Night is one of my favorite Shakespeare plays, and I wasn't sure how it would fit into less than two hours, but this adaptation keeps the scenes that are necessary to the story, and most of what was left behind is not missed.

The show begins with music, as is appropriate for a play that begins, "If music be the food of love, play on." The Asian-influenced score, composed and directed by Jason Hansen, involves the entire cast at times, but primary musical duties come from the four-woman chorus, providing amazing a capella vocals with accents of percussion, and from Reyes, who plays ukelele and sings as a charming Feste. The chorus adds atmosphere and comments on the actions of the play throughout, and though it was a style I'm not familiar with, it was beautiful.

The plot is timeless: Girl survives shipwreck, pretends to be boy to work for a Duke, who sends the boy (girl) to woo his beloved, a lady who falls in love with the girl, who is also in love with the Duke. That old story! Of course, in Shakespeare's day, all roles were played by men, so it seems appropriate that several of the male roles here are played by women.

The cast is uniformly terrific in all of their roles, but Stephanie Bertumen as Viola and Francesca McKenzie as Olivia are really wonderful. And Eric "Pogi" Sumangil and Alex Galick are hilarious as Sir Toby Belch and Sir Andrew Aguecheeck. These can be characters where a little goes a long way, but not a moment of their stage time is wasted. Eric Sharp is a gloriously pompous Malvolio before his terrible comedown, and a tragic figure by the end of the play.

The production is low on pretension and high on physical comedy. Mixed Blood's stage includes a number of levels, with seating on two sides of the playing area, effectively placing the whole audience within a few rows of the stage and in full view of the other half of the audience. The many levels also allows Reyes to keep players on stage even for scenes they are not part of, and I loved watching their reactions to the action. 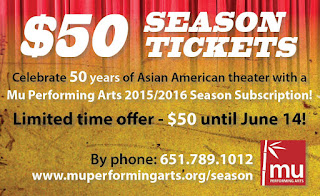 In another nod to Shakespeare's time, the cast, particularly Reyes as Feste, welcome the audience into the show with funny asides and a few contemporary uses of language that work very well. The comedy is performed with relish and not much reverence, but the love stories in the play are never lost in the laughs. I think this would be a wonderful first experience for anyone who hasn't seen much Shakespeare.  I would go so far as to say that if he were with us today, this is a show that the Bard himself would enjoy.

It's also a great introduction to Mu Performing Arts, and here's another one: Through the run of Twelfth Night, Mu is offering season tickets to their four-show 2015-2016 season for $50. It's a great deal, and a great way to make sure you're not missing the work of this wonderful company!

Trailer for Twelfth Night below!