The Gospel of Lovingkindness at Pillsbury House Theatre 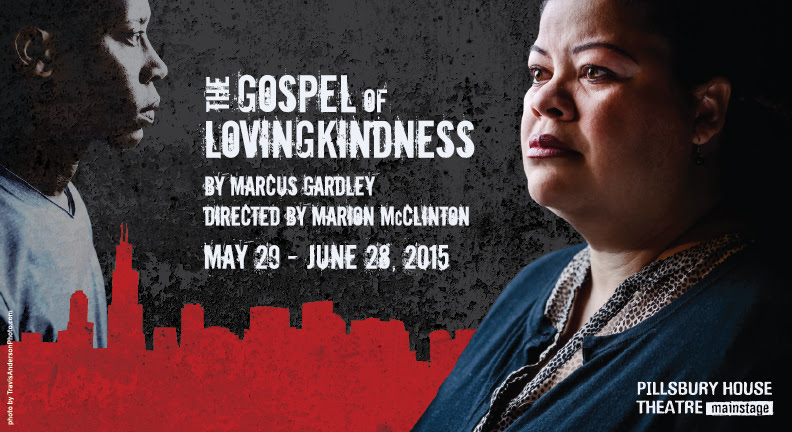 I saw The Gospel of Lovingkindness at Pillsbury House Theatre nearly a week ago, and I still haven't absorbed it completely.

I'll tell you this, though. As soon as it ended, I was making plans to see it again.

Set in Chicago in 2012-2013, The Gospel of Lovingkindness is about the murder of a young man, the reasons and aftermath of that murder, and the events leading up to it. The play moves back and forward through time, and the full cast of characters is played by just four amazing actors--Namir Smallwood plays both the perpetrator and the victim of the murder, and Thomasina Petrus plays Mary, the grieving mother of Manny, the murdered boy. Aimee K. Bryant and James A. Williams. play all the other roles, creating distinct characters in each scene.

This is the second play by Marcus Gardley that I have seen at Pillsbury House Theatre (they did the road weeps, the well runs dry in 2013) and I love his way with language. Conversations between characters sound authentic, whether between coworkers or between sons and their mothers. But Gardley sometimes lets his language soar poetically, as in a description of peach cobbler, delivered by James A. Williams, that made my mouth water. Heightened language also conveys the depths of sadness experienced by both mothers.

Language is not the only tool this play uses to tell the story. Director Marion McClinton uses the spare set to great effect, and creates seamless transitions between scenes, locations, and times. And one of the most moving scenes is nearly wordless, as Petrus breaks down after Manny's death, to devastating effect.

Although the subject matter, partly based on actual events, is grave and incredibly timely, there's a surprising amount of humor in this play, and even a little magic realism when Bryant appears as famed journalist and civil rights leader Ida B. Wells. I'm hesitant to say any more, as part of the joy of Gardley's work are his unexpected parallels and allegories, which are best discovered in the theater.

I'll say this, though: It's playing through June 28. Don't miss it. See it twice.
Posted by Carly