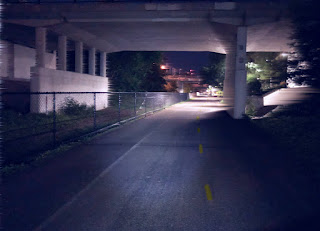 What's It All About:
"Late on a crisp fall night, a bike commuter’s worst nightmare comes true. Eva is riding alone on the Greenway bike path - a dark trench lit only by her bike light - and something unfriendly starts following her. And it's catching up. And she can’t pedal any faster. And her light just died."

What We Thought:
So far, Greenway is the spookiest show at the Twin Cities Horror Festival this year. Yay, spooky! Written and directed by Tom Reed, the play starts with a group of friends heading off after an evening at a show. Eva gets on her bike to head home and her coworker (boss?) Dave offers to accompany her home. He persuades her to take the Greenway instead of her preferred city streets. The conversation that ensues between Eva and Dave is freaking SPOT-ON and way too familiar, and soon Eva is on her own on the Greenway.

To say much more would be spoilery, but suffice it to say that she should have taken the city streets. Think Duel on bikes. The staging and use of lighting is ingenious and realistic. Greenway has a delightful slow burn and beautifully settles into a suspenseful, tense atmosphere which ends with a genuinely uncertain resolution. And I'm really glad I didn't have to ride my bike home.
Posted by Carly