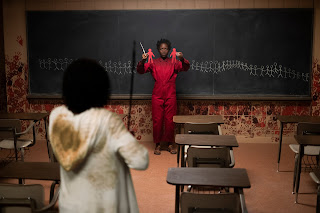 I digress from our regularly scheduled theater programming to tell you that I read a bunch about Jordan Peele's fantastic horror film Us.

Here are a few articles I found particularly interesting.

WARNING: THIS IS SPOILER CENTRAL.

Wikipedia Brown on Twitter: Things I Missed the First Time Around,  @eveewing

In “Us,” Peele uses the metaphor of the divided self to explore what lies beneath contemporary America, its double consciousness, its identity, sins and terrors. The results are messy, brilliant, sobering, even bleak — the final scene is a gut punch delivered with a queasy smile — but Jordan Peele isn’t here just to play.

A Thinkpiece About Thinkpieces About Us, Michael Harriott, The Root


Good black films can’t be about regular black people. For a black film to be a critical darling, it must be centered in whiteness. The pain, the heroism or the story must be relatable to white people. The film must have a white savior or teach us an existential lesson about the universality of mankind. Black people are only seen as human when they are suffering from black shit (slavery, oppression or injustice).


We dissect Jordan Peele’s new psychological thriller, “Us,” and discuss the film’s central question (WITHOUT SPOILERS): Are any of us ever truly free from the past?


This movie’s about maybe the monster is you. It’s about us, looking at ourselves as individuals and as a group. 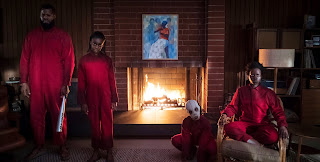 What Is ‘Us’ About? Here Are Some Interesting Theories, Kyle Buchanan, New York Times


Is Jordan Peele’s “Us” a metaphor for our politically polarized moment, a rallying cry for the dispossessed 99 percent or simply a nifty home-invasion movie?

This horror hit from the director of “Get Out” is designed to keep audiences guessing, and each viewer is likely to leave with his or her own interpretation of what the film really means. (Perhaps we should have known when the first image Peele released for “Us” was of a tantalizing Rorschach blot.)


The film’s writer and director discusses a haunting scene where members of a family meet their terrifying doubles.

The sound has provoked strong reactions in audiences and critics. In his review, New York magazine’s David Edelstein described it as “the whistle of someone whose throat has been cut” and “a rush of acrid air from a tomb.”

On the trail in Austin, Nyong’o was recalling how she fell in love with acting when something — someone — broke her focus. It was a large man in a faded T-shirt and white earbuds walking behind us, talking so loudly that we were struggling to hear one another. Nyong’o stopped and turned around. As the man passed by, she gave him a look of such elegant and devastating ferocity that I thought he might evaporate mid-stride, leaving only the earbuds behind. The bodyguards may not have been necessary after all.

‘Us’ Took Hands Across America and Made It a Death Grip, Erik Piepenburg, New York Times


“There’s something cultlike about the imagery that makes me think of the Manson family singing folk songs as they leave the courtroom,” said Peele, who was 7 when the nationwide gathering happened. “There’s like an insistence that as long as we have each other, we can walk blindly past the ugliness and evil that we may be a part of.”

After ‘Us,’ Jordan Peele Crosses Over to ‘The Twilight Zone’, Dave Itzkoff, New York Times


But in this tale of unlikely parallels, Peele has been shadowing Serling’s trajectory all along, whether or not he wants to admit it. He, too, has used genre entertainment to convey otherwise unpalatable truths to his viewers, deploying sketch comedy to comment on police brutality or horror movies to skewer self-satisfied liberals.

How ‘Us’ Turned the Weed Anthem ‘I Got 5 on It’ Into a Creepy Horror Theme, Garrett Caples, New York Times