The Picture of Dorian Gray - Collide 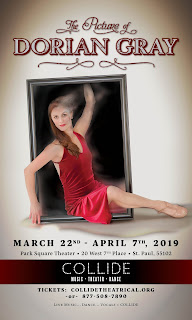 The Picture of Dorian Gray by Collide Theatrical Dance Company

About:
COLLIDE presents a contemporary version of Oscar Wilde’s novel, The Picture of Dorian Gray. Set in modern day New York City, the story follows a beautiful young Dorian Gray who stumbles into an accidental photo opportunity and shoots to heights of social media fame. Disturbed that her physical beauty will deteriorate with age, Dorian wishes for eternal youth. Her wish is granted, and the photo rather than the woman degrades as she pursues a life of corruption and debauchery, reminding her that though her looks are unscathed, her soul is not. Can she still find salvation? Or is her soul trapped in the photograph? Created by Regina Peluso and Michael Hanna and featuring the COLLIDE Band and Company Dancers.


What We Thought:
We've loved Collide's theatrical dance work in the past, especially 2017's delightful Dracula and last year's charming partnership with History Theatre: Dance 'Til You Drop. When they announced their season, we were most intrigued to see how they told The Picture of Dorian Gray, based on Oscar Wilde's 1890 novel.


Written and assisted directed by Michael Hanna, with choreography and direction be Regina Peluso and music direction and arrangements by Shannon Van Der Reck, this is an ambitious classic work of literature for Collide to take on. And yay for being ambitious!

The original story (which is far more complex than we remembered) is about Dorian Gray, a young man about town who is the subject of a painting by artist Basil Hallward. Through sitting for the painting, Gray becomes acquainted with Lord Henry Wooton and becomes immersed in Wooton's world of decadence and hedonism. Gray makes a wish that he will stay as young and beautiful as he is and the painting will age instead of him. Debauchery, lost love, revenge and murder ensues as the painting shows the strain of Gray's hard living.

Only when reading about the original story, did we learn that The Picture of Dorian Gray was quite shocking in its day. From Wikipedia (SORRY):


Fearing the story was indecent, the magazine's editor deleted roughly five hundred words before publication without Wilde's knowledge. Despite that censorship, The Picture of Dorian Gray offended the moral sensibilities of British book reviewers, some of whom said that Oscar Wilde merited prosecution for violating the laws guarding public morality. In response, Wilde aggressively defended his novel and art in correspondence with the British press, although he personally made excisions of some of the most controversial material when revising and lengthening the story for book publication the following year.

Michael Hanna transports the story to the late 1990s and sets it in the world of fashion with a all-female cast. Dorian Gray is a model, Basil Hallward is a photographer (rocking a denim jumpsuit), and Lord Wooten is designer Lady H (in full Sigourney Weaver gloriousness). The cast is universally excellent, with standouts in Chelsea Rose as The Picture and Heather Brockman as Lady H. The music selections are perfectly paired with the story. Katie Gearty and Katie Bradley (who also stars as a love interest for Dorian) sing the hell out of songs from Madonna's "Vogue" and "Fame (What a Feeling)" to "I Put a Spell On You" and "Young at Heart." Gearty in particular is a treat--she can sing anything and everything beautifully.

Although the dancing is excellent and the music is wonderful, the story doesn't totally come together for us. I don't think dance and music alone can convey the wish for youth and beauty, particularly when the roles are played by young and beautiful performers. Also, I think the lack of a major antagonist (a vengeance-seeking brother) leaves the story without the bite it could have had. Still, we love Collide and are eager to see what they bring us next!

Accessibility Notes:
Not much, it's Park Square Theatre. But it was a treat to be able to choose our own seats at Dorian Gray. We sat in the second row! We never get to sit that close! $$$.
Posted by Carly