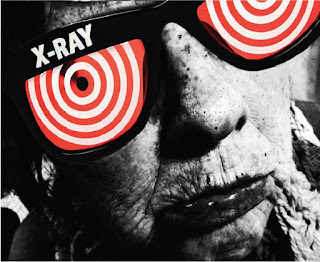 Our experience at Pop Goes the Noggin by S.O.S. Theater at Gremlin Theatre in St. Paul (through May 12) began with an utterly fabulous spring afternoon on the patio at Lake Monster Brewing with fantastic food by Reverie Mobile Kitchen.

Can all plays be at Gremlin Theatre, please? Particularly in the summer? THANKS!

Anyhoo. Pop Goes the Noggin began with a curtain speech (by the playwright Michele Lepsche, we think--she didn't introduce herself) wherein we were told that the play was in rough shape and then she (Lepsche) got sick. Luckily,  director Kari Steinbach and dramaturge (and cast member) Greta Grosch came through to help her out and the show was completed. It's a strangely honest way to kick off your opening night.

Pop Goes the Noggin is set at Loon Lake State Hospital in 1972. We meet the residents; voluble, chatty, prone to ordering things from the back of comic books Shirley Jean (Ellen Apel), gruff and taciturn Georgie (Isabel Middleton-Watts), Tiny (Katherine J. Lee), who will do anything for candy and speaks only through her Magic Eight-Ball, and Mamie (Elizabeth Efteland) who is in a wheelchair, possibly with spina bifida.

They are all together in a ward at Loon Lake State Hospital, under the care of Nurse Triplet (Greta Grosch), Dr. Plotzie (Tyus King Beeson), and Johnny John (Taylor Evans) and they all have dreams. Shirley Jean wants to get to the Neil Diamond concert at the State Fair, Georgie wants to get out (on Wednesday, allegedly), Mamie wants to contact her family, and Tiny is a mystery--or "ask again later."

As our story begins, married mother of four Bella (Catherine Johnson Justice) joins the group having been sent to Loon Lake due to exhaustion. She immediately sets out to make friends and enemies in equal measure, being a cunning, manipulative addition to the crew. Meanwhile, Shirley Jean plans her escape to make it to the Neil Diamond concert and something big is brewing for Loon Lake. There is also a monkey.

One of the mysteries of Pop Goes the Noggin is what challenges resulted in our heroines residing at the hospital. According to the history of Loon Lake State Hospital on S.O.S. Theater's website, "the patient population consisted of persons of all ages representing all types and degrees of mental disability, many of whom are only physically infirmed, not mentally." And yet, to not know what each character was dealing with (only alluded to in a vague fashion) made it hard to sympathize with the patients and understand their motivation.

If the intention was to show a state hospital as a home of last resort for people who couldn't make it on their own and had no family willing to help them, that could have been clearer. It may have also given greater weight to the (rather offhanded) revelation that the hospital was closing. There didn't seem to be any discussion of where the residents would go, either.

Unfortunately, the play doesn't seem to have a point of view, and the residents' issues are handled in broad strokes with little subtlety or humanity. The actors did what they could with the material, but without further context, it's distressing in 2019 to see able-bodied actors playing characters with physical and mental challenges.

Perhaps there was a clear intent at the start of the playwriting process, but the end result does not bear evidence of that intent. If the play goes through further revisions, we hope that there will be serious consideration given to the characters' humanity in the next iteration.
Posted by Carly