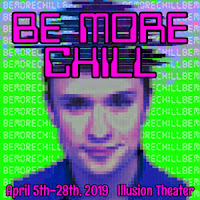 Minneapolis Musical Theatre's production of Be More Chill is a rare opportunity to see one of the hottest shows on Broadway right here in Minnesota.

And let us tell you friends, we VASTLY preferred MMT's version to the Broadway version. Read on to discover why!


Be More Chill is a theatrical sensation. With music and lyrics by Joe Iconis, book by Joe Tracz, and based on the 2004 novel of the same name by Ned Vizzini, this new musical premiered at Two River Theatre in Red Bank, New Jersey in 2015. Last year, the extended off-Broadway run at New York's Signature Center picked up a cult following, and in February 2019, the musical opened on Broadway. The show has been compared to Dear Evan Hansen for the way it speaks to young people, who are the show's most fervent fans.
We witnessed this wild affection for ourselves when we caught Be More Chill in previews on Broadway. The show, however, left us cold. If it wasn't for our affection and respect for Minneapolis Musical Theatre's excellent work (like last year's amazing High Fidelity), we probably would have skipped it altogether. We are so glad we didn't!

Be More Chill is about a young social outcast named Jeremy Heere (Maxwell Emmett Ward), who lives at home with his divorced father (Christian Unser) and hangs out with Michael Mell (Jim Belden), his best friend and fellow outcast. Jeremy has a crush on Christine Canigula (Caitlin Featherstone) and gets involved with the school play to get closer to her. Jeremy is casually bullied by popular Rich Goranski (Nick Manthe), but Rich nonetheless shares with Jeremy his secret of social success: an oblong gray pill called a squip. You can pretty much guess the rest, if you've seen a movie.

Even though Broadway is considered to be the pinnacle of theatrical entertainment, there are times when a show just doesn't work for us on Broadway. Spring Awakening was a show we couldn't stand on Broadway, but Theater Latte Da's production with the U of M was a revelation. The same with Be More Chill. The Broadway production was over-produced with lots of flashing lights, no heart, and little humor. MMT's version could not be more different.

For one thing, Jeremy is played by Maxwell Emmett Ward, who we last saw as Dick in MMT's High Fidelity. He not only gives sweetness and realism to Jeremy, he is also fantastically funny, with devastating timing. Did we mention his incredible voice?


As Jeremy's best friend Michael, Jim Belden kills "Michael in the Bathroom," one of Be More Chill's most memorable numbers. Caitlin Featherstone perfectly captures Christine Canigula's quirky and endearing personality. The chemistry and relationships between all three give this production its heart and soul. There are apparently changes in the script as well, with MMT using the off-Broadway script that was made available for licensing. But the changes didn't stand out, except that we felt much more connected to the characters and invested in the outcome in this production.

The scene that really exemplifies the difference in the shows is "Two-Player Game," where Jeremy and Michael express their friendship through a video game. On Broadway, the song was accompanied by lights and projections simulating the game, but MMT's version, the two characters connect through their physicality in wielding their game controllers in coordination.

Also notable is the physical coordination between Jeremy and the embodiment of his Squip (Mike Tober). Ward really seems like the Squip is controlling his movements against his will, which is both funny and scary.

Director Sara Pillatzki-Warzeha, who also directed High Fidelity (which we saw three times), brings the best out of the talented young ensemble. The actors feel like the teenagers they are playing, and they enthusiastically perform Abbi Fern's choreography. A kick-ass band, conducted by Anna Murphy, adds to the fun.

Go see this and support Minneapolis Musical Theatre. They are doing beautiful work, and they imbue all of their work with talented artists and plenty of heart.

And in case you're wondering how MMT's excellent production compares to the Broadway one, here's the New York Times review of Be More Chill by Ben Brantley:

"This all sounds like more fun than it is — at least for anyone over the age of 21. (That’s a generous cutoff point.) The acting, singing and dancing (choreographed by Chase Brock) are all, to put it kindly, frenetic. The set (by Beowulf Boritt), lighting (Tyler Micoleau) costumes (Bobby Frederick Tilley II) and projections (Alex Basco Koch) bring to mind bright fan fiction comic books drawn in fluorescent crayon."