2 Gents, 1 Jungle - The Two Gentlemen of Verona at the Jungle Theater

With a few caveats, I am slowly falling in love with the Jungle Theater. While this is only the second show I have seen there, The Two Gentlemen of Verona was a thoroughly enjoyable evening of theater. I was there the 2nd night of performances and the house was full. Lucky for me I happened to be sitting in what appeared to be the 'theater section' - Craig Johnson sitting behind me, Matt Sciple next to me and many others down the row. The house was in a great mood for a Saturday night and ready for a great time.

Sarah Rasmussen's production did not disappoint. This production was originally produced at the Oregon Shakespeare Festival in 2014 where it was the first all-female Shakespeare in that theater's history. The Jungle production was adapted from that OSF production and maintained the all-female cast. The story, in brief, is this. Valentine (Mo Perry) and Proteus (Christiana Clark) are best friends. Proteus is in love with Julia (Maggie Chestovich), and she with him. Valentine is sent to the court of Milan, and after making a promise of true love with Julia, Proteus follows him. When Proteus arrives in Milan he discovers that Valentine is in love with Sylvia (Lenne Klingaman) - and soon Proteus follows his lead. In fact, Proteus tells the Duke of Milan (George Keller) that Valentine and Sylvia are running away. The Duke banishes Valentine, Julia shows up in Milan in disguise as a man, and...go see the show. Some of these amazing actors play multiple roles - George Keller, for example, plays the Duke as well as the comic relief character of Launce. Her dog Bear also plays Launce's animal companion Crab...and he played it perfectly! Also on stage are such Twin City Theater legends as Barbara Kingsley and Wendy Lehr.

The casting was perfect. Each actor was spot on, finding the true emotions and humor of the show. The language and text was clear (which can be tough for Shakespeare at times). Julia comes across as very young and childish in the first act - a bit whiny, and overdramatic. However when she comes to Act II in disguise, she nails the new "character" so well. It was great seeing an actress play both sides of a character so clearly and so honestly. Honestly, I felt the same way for the full cast - fantastic. 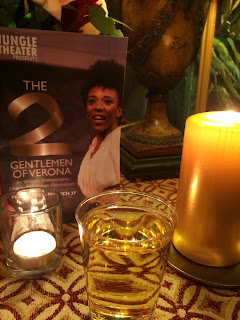 The set is a nice open stage with onstage seating on the sides. The front of the stage has steps down both sides of the center section, a green topiary on each side, along with a lamp above the topiaries. The back of the stage has a wide door across the center which is open at times to change scenes, along with an entrance door on one side. There are trees on each side of the wide door, and a bench. One of the trees is designed perfect for climbing to an upper level that is set across the top back of the stage. The whole set by Andrew Boyce is in a pale pink, and is gorgeously lit by Barry Browning. The costumes are mainly white and black, though Julia has some color to her dress and the costumes in Milan are gorgeously colored. Great work by Morie Sine Clinton, and great wigs by Laura Adams. Though the show is 2 hours and 20 min, with a 20 min intermission - it never felt that way. The pace was fast and created a very entertaining evening.