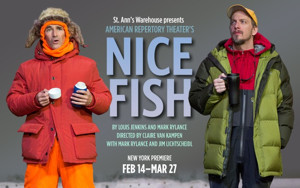 Nice Fish, a play written by Mark Rylance and created primarily from the gentle, quirky prose poetry of Louis Jenkins, was commissioned by and premiered at the Guthrie Theater in 2013. Tony Award-watchers will remember Rylance recited poems by Jenkins as his acceptance speeches in 2008 and 2011.

The American Repertory Theater produced this play, and after a brief run in Cambridge, MA, it is having its New York premiere at St. Ann's Warehouse. Although there are some changes from the Guthrie version, it still stars Rylance and local treasures Jim Lichtscheidl, Bob Davis and Raye Birk.

Being a huge fan of all things Mark Rylance and Louis Jenkins's poetry, I saw it several times here at the Guthrie. But I couldn't help but wonder ... can a quirky, midwestern-feeling play about ice fishing succeed on the mean streets of New York?


Let's see what the critics had to say!

Broadway World did a beautiful Review Roundup, saving me and you the time of hunting these reviews down. I think I'll use that time to go read a few Louis Jenkins's poems.
Posted by Carly