Yes, here is another post about a theatrical experience that is not an opera, nor is it really a musical, nor a play with music. It is its own thing and it is wonderful. Aging Magician (playing a short two-performance run at the Walker Art Center) is a work co-created by Paola Prestini, Rinde Eckert, and Julian Crouch. I know, those names meant nothing to me either, however the name Julian Crouch sounded familiar. Reading the link, you'll see that he has done a few designs for Broadway, and the Metropolitan Opera! After seeing this work though, these are names that I will remember and look for. 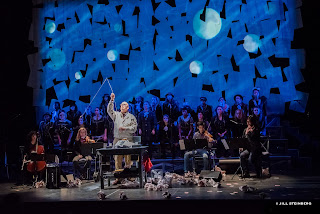 This work is the story of Harold, an older clockmaker who is also writing a book called The Aging Magician. Through out the piece he speaks of his own life, yet also tells the story of the aging magician who has found a boy to share all his stage magic/secrets with. Rinde Eckert plays Harold and has a great character in that role. Somewhat stuttering, a bit shy, focused on the story and wanting to tell it so badly and to finish writing the story - and at the same time breaking into these beautiful songs that get to the core of both characters - Harold and the magician. Rinde has a fantastic voice that is burnished and warm, yet also with an amazing falsetto and range. Harold talks about clocks and how we in the digital age are so far removed from the classic clocks with their gears moving, rotating, reminding us of the cycles of life and the orbits in the sky. He speaks of different magic tricks and uses some to show us the skills of the aging magician, as well as using them to illustrate the story, to make a point, to get us to think. 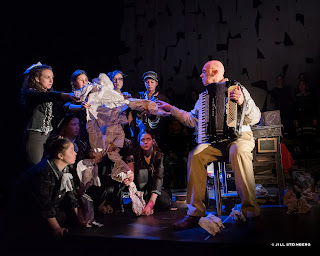 One story he uses is of William Robinson, a magician who performed under the name Chung Ling Soo. According to Harold, he performed under this name so that he didn't have to speak to the audience. He could be silent and just do his magic. Williams/Chung's greatest trick was to catch a bullet in his teeth. At his last performance something goes awry and he is shot on stage, and dies. Harold shows this by falling to the ground, reaching into his inside jacket pocket, getting a deck of cards and then letting them fall out of his hand. A simple action which was so beautiful to watch. 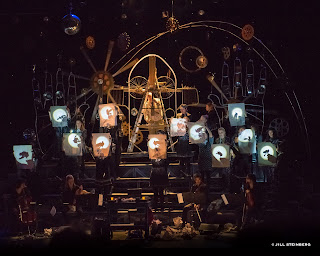 The set is simple. A set of risers on which the Brooklyn Youth Chorus sits and stands, a string quartet in front, and a desk with a chair at the center stage. There is a bike off to the side, and the back of the risers have a curtain covered with pieces of paper. When we come into the space, Harold is sitting and writing at his desk. Consistently though out the show paper is used in so many different ways - from being held up by the chorus so that video of the Coney Island Cyclone can be shown, to becoming birds in various forms. The top of the desk is also a chalkboard and gets utilized at one point. There are so many things that happen through out the show that were gorgeous and interesting and moving - but it is one of those works that you need to experience. You need to hear the music of Paola Prestini performed by the chorus and the American Contemporary Music Ensemble. The music was beautiful and not in a jagged way that some think of contemporary music, nor in a minimalist way. It was perfect for this work. You need to hear the voices of the chorus mixing with Rinde's voice. You need to see the visuals, especially the ending visual so fantastically created by Mark Stewart. Like so much that I have seen at the Walker, it is a theatrical work that I will be thinking about a lot.