Don’t let me be misunderstood!

Nina Simone: Four Women is currently in its world premiere at the Andy Boss stage at Park Square Theater in St. Paul. The show runs through March 26.

Actor-singer Regina Marie Williams takes on the role of Nina Simone. It’s a role she performed a few years ago in a one-woman show at the Capri Theater in North Minneapolis. That show was essentially just the music of Nina Simone. But here and now, we have a full-fledged play written by Christina Ham and directed by Faye Price, with Nina Simone as the central character.


The play is set in 1963 in the bombed out ruins of the 16th Street Baptist church in Birmingham, Alabama, the day after the four little girls were killed. The event inspired Nina Simone's song "Mississippi Goddam." She meets three other women who are seeking shelter in the church from the riots outside. These woman are played skillfully by actor-singers Aimee K. Bryant, Thomasina Petrus and Traci Allen Shannon and serve as the fictitious inspiration in the show for Simone to write one of her signature songs, "Four Women," which depicts stereotypes of black women.

It was during this period that Simone became more of an artist/activist--realizing how difficult it was to sing tender ballads like “I Love You Porgy” while the civil rights movement was gaining momentum. (Note her use of "Love," not "Loves.") The play clearly outlines how black women were marginalized during this time--not just for their race, but also for their sex. I learned that during the March on Washington in 1963, black women were even forced to walk down a separate street to hear Martin Luther King speak. Also, only one black woman was allowed to speak at this monumental, historic gathering and her speech was written by a black man. 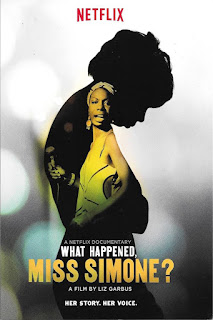 Nina Simone: Four Women is an important, thought-provoking piece of theater, where these four women bond and become stronger individuals as a result. In the process, we are given a taste of Simone’s prickly personality. (Much later, in the 1980s, she would be diagnosed as bipolar. According to her daughter, she was an abusive parent after being abused herself both physically and mentally by her controlling husband.)

This original production is a good introduction to an important turning point in Nina Simone’s complex and complicated life. Sanford Moore’s arrangements are beautifully vocalized in the play--the harmonies are heavenly. A special shout out to the effective lighting design by Michael Wangen. My only disappointment was that there wasn’t more of Nina Simone’s music in the show, but it understandably wasn’t created as that type of play. Thankfully, we avid Simone fans have our old LPs and CDs for that!

A marvelous companion piece to this play is the documentary What Happened, Miss Simone? I highly recommend it if you have any interest in Nina Simone, and after seeing this show, you will.