We all know the work of Shel Silverstein. His quintessential book "The Giving Tree" is known world-wide, and most of us grew up with some of his kids poetry books. What some people may not know is that Silverstein was also a songwriter."A Boy named Sue" was one of his songs, and I first heard his music via 'The Ballad of Lucy Jordan." All this to say that when I heard that Freshwater Theatre was going to do "An Adult Evening of Shel Silverstein", well, I was intrigued. Beyond "The Giving Tree", I had always found his poetry to be amusing but with a touch of the fantastic, and troubling. I was not disappointed. 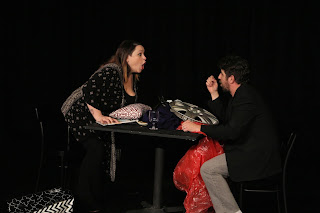 Out of the ten short plays included in the script for "An Adult...", Freshwater did two of them. Directed by Ariel Leaf, they started the evening with "The Best Daddy." This short piece deals with a father who bought his daughter a pony for her birthday. He presents it to her covered up with a blanket. After she guesses that it is a pony, he then tells her that he shot it.....and that it isn't a pony but her younger sister....who he may have also shot..... Absurd and troubling, yet John Zeiler and Lacey Zeiler played the humorous aspects perfectly. Lacey knows how to play the child, while also providing a touch of the adult "what the ..." John also plays the father fantastically. Allowing his daughter to enjoy the surprise of a pony, then shocking her with the truth, then backpedalling to the next truth, etc. Always being true to what is being said and fully believing in his actions.

The second short Silverstein play was "One Tennis Shoe." Again John and Lacey Zeiler played both parts - a husband and a wife sitting down for coffee. The husband brings up that the wife is starting to become a bag lady - and things start to unravel from there. This is a great two-hander that played to the strengths of both actors versatility and their commitment to the action. Never did it seem that they were rolling their eyes at how crazy these two seem but they played the characters truth...and it was funny!! 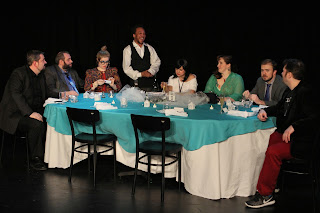 After a ten-minute intermission, "Table 12: A Play at a Wedding" by Ruth Virkus started. The setting is a wedding reception, specifically that one table where all the riffraff is seated. You know the table - the friends of the brides parents who the bride is forced to invited, the loser friend of the bride, the grooms boss, the stalker ex-boyfriend of the bride, etc. Add to this a waiter who is being paid to babysit the stalker (by the stalkers mother) and you have the perfect combination of people for a really wild, fun ride of a show. Directed by Nicole Wilder, the cast of eight were perfectly cast. The table starts with Christophe (Ben Layne) and Leroylyn (Katie Starks) as the next door neighbors. Add the grooms boss Mave (Rachel Flynn), then the waiter (Michael Terrell Brown - playing him with just the perfect amount of flame/flair) bringing in Charlie, the ex (perfectly played by Scot Moore) and you are off to a great start. The waiter laying down the rules for Charlie was a great bit, and well written. Finally, add to the mix Amy waiting for her blind date (Mame Pelletier), Saul - the ex brother-in-law to the bride (J. Merrill Motz) and The Other Guy (Michael Postle) and you have a fantastic recipe for fun, laughs, philosophical insights on relationships, and a totally charming work. The whole evening was 90 mins and thoroughly enjoyable. I look forward to seeing more new work from Freshwater Theatre.