The Bridges of Madison County - National Tour at the Orpheum Theatre 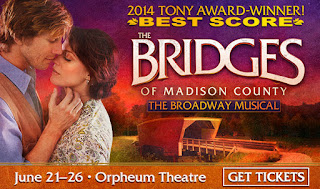 A sweeping romance with a gorgeous musical score, The Bridges of Madison County had too brief a run on Broadway in 2014. It's a rather small story and an unusual musical without large production numbers, which may have made it a hard sell. Fortunately, the touring production is here for a week to show us what we missed.

Based on the 1992 best-selling novel by Robert James Waller, Bridges tells the story of Francesca Johnson, an Italian war bride who has lived with her husband and children on a farm in Winterset, Iowa, for nearly twenty years. She is a devoted homemaker and mother, but is discontented with her life.

When Francesca's husband Bud, and children Michael and Carolyn, load up the truck to show Carolyn's prize steer at the state fair in Indianapolis, she is left behind, looking forward to spending some time not taking care of others. A National Geographic photographer looking for directions pulls up to her house and changes her life. She takes him to the covered bridge he's seeking, and ends up cooking him dinner. Robert Kincaid is an enigmatic loner, but drawn to this woman whose rich inner life has been sublimated by her years on the farm.

The story is simple, and the original book is not universally beloved. What elevates this adaptation is the music. Jason Robert Brown has amassed a following among musical-theater aficionados as the composer of musicals including Parade, Honeymoon in Vegas, and The Last Five Years (which was made into a movie starring Anna Kendrick and Jeremy Jordan, which I highly recommend).

Brown's music for Bridges does a wonderful job of delineating characters and story. Rather than an overture, Francesca sings of her life in "To Build a Home," which is full of unexpected turns of melody and phrase. Much simpler are the songs given to the rest of the Johnson family and their neighbors, who express themselves through songs inflected with folk and gospel. When Robert arrives, his duets with Francesca are soaring melodies that clearly show the heights of emotion that their relationship brings about.

The music is beautifully performed, particularly by Elizabeth Stanley as Francesca and Andrew Samonosky as Robert. Separately, they convey worlds of longing, and their duets feel like the completion of an unfinished chord. The supporting cast are wonderful, particularly Mary Callanan as an inquisitive but supportive neighbor, and Cullen R. Titmas as Bud, the husband who never quite understands his wife. Caitlin Houlahan and understudy Bryan Welnicki were excellent as Francesca's very American children, with their own preoccupations.

The staging is spare, with just the suggestion of bridges, farmhouses, and other scenes set against a backdrop of wide open sky, suggesting the Iowa farmland. Set pieces moved on and off the stage by the ever-present townfolk lend a fluidity to the proceedings as one scene fades into the next and settings overlap, from the Johnson's kitchen to the pay phones her family use to call home from the road. Although the scale of the show is small, I look forward to seeing even more modest productions when the rights become available to smaller companies (Theater Latte Da, perhaps?). The only extravagance necessary for this story is an excellent group of singers and musicians to do justice to the magnificent score. This production has those qualities in abundance, and should not be missed.