The Ballad of the Pale Fisherman - Transatlantic Love Affair

Transatlantic Love Affair brings an enchanting fable to life (again) at the Southern Theater through June 17. The Ballad of the Pale Fisherman first appeared in the 2010 Fringe Festival, and the company expanded the piece for Illusion Theater's Lights Up! festival in 2011. At that point, I had not yet seen and fallen in love with this group's work, so I was thrilled that they brought it back and I could actually see it.

The story is based on Scottish and Irish legends of the selkies, who live in the sea as seals, but can shed their skins and assume human form on land. But the call of the sea is strong, even when the selkie finds love on dry land. In a fishing village on a remote island, tales of the creatures abound, and a fisherman casting his net might pull in more than he bargained for.

If you have not seen a Transatlantic Love Affair show, this is a lovely introduction to their work. On a bare stage, seven ensemble members create the whole world of the show, from the fishermen at work, to the women mending nets, to the harbor bell and the sea itself, with just their bodies, voices, and faces. Our collective imagination fills in the details, which is something exciting to experience, though a little hard to describe. 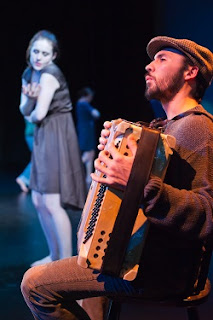 As always, the ensemble is superb under the direction of Isabel Nelson. Diogo Lopes portrays a young boy who grows to be a fisherman, following in his family's footsteps. Emily King is wonderful both as the slightly ethereal young woman and as the sea creature. Heather Bunch and Adelin Phelps are comic and tragic as the elders of the village who have seen a lot in their time. As both an old fisherman with a story of his own and a young one eager to leave the island, Alex Hathaway is alternately wistful and brash.

Allison Witham, always one of our favorites to watch, has amazing physicality as an old woman, a bartender, and even a seal. But all of the ensemble play many roles; human, creature, and objects we think of as inanimate. Derek Lee Miller provides an original accordion score and serves as the narrator, who knows the story all too well. Anna Reichert's costumes are a backdrop for the many roles of the players. The only non-human effect on stage is the gorgeously evocative lighting from Mike Wangen, the Twin Cities' theater lighting MVP.

Transatlantic Love Affair is absolutely one of our favorite theater companies in the Twin Cities, and The Ballad of the Pale Fisherman is an enchanting fable beautifully brought to life in the company's distinctive and arresting style.

BTW: If you want to dive into the world of selkie stories on film, there's a great list here, which includes The Secret of Roan Inish, the 1994 John Sayles film which introduced me to this fascinating legend.
Posted by Jules