Le Switch by Philip Dawkins at the Jungle Theater 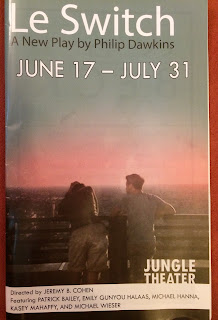 If you are looking for the perfect play to celebrate Pride, to follow Two Boys Kissing, or even to see where the anger from The Normal Heart finally got the GLBTQIA community - Le Switch at the Jungle Theater is the one. In fact, in my view, Le Switch may be a perfect play. I know that is a LOT of pressure to put on a play, and on a review, but here are my thoughts.

The plot is fairly simple. David (played by Kasey Mahaffy) is commitment-shy, and not sure what he makes of marriage equality. He falls back into the comfort of his home of unopened, antique books and his deep friendship with his roommate. Frank (played by Patrick Bailey) is a father-figure, activist, and grieving the loss of his longtime companion. David's best friend Zachary (Michael Wieser) is getting married, and is holding the bachelor party in Montreal. When David gets to Montreal, he is swept off his feet by a gorgeous, young florist Benoît (Michael Hanna). In the months that follow, David and his non-traditional family, including his sister Sarah (Emily Gunyou Halaas), have to figure out what commitment and marriage really mean to them, while also realizing what it means to be queer.

David is a librarian who is focused on classification, and cataloging. He likes things being where they should be. He knows who he is as a queer man of a certain age, and what he believes about marriage. At the same time, he collects books and leaves them unopened because then there is a mystery about them, they could be anything and he can believe them to be anything. There is a fantastical aspect of David. I think the cross-cultural romance helped bring this out even more. After all, when we travel aren't we usually able to be more ourselves? Free from the roles we have imposed on ourselves back at home?

The script, written by Philip Dawkins, is fast-paced, funny, smart, honest, timely and real in so many ways. He knows how to tell a story that affects multiple generations to a multi-generational audience. The question of marriage equality has many responses from the personal to the political. There are some in an older generation who are against marriage equality because it is a heternormative institution that "queers" should never want to follow. They pride themselves on being and staying different. There are others who fully accept and want equality because they are finally allowed something they never thought they would be allowed. This script shows all of these sides while never sounding preachy, yet keeping it honest and real. Along with that there is the question of what does it mean to be queer? If you have been feeling different all your life but suddenly you are no longer different...how do you deal with that? (there is a perfect line for this that I wrote down...but might have had the cap on my pen...darn.)

David goes on a journey, not only to Montreal, but to a different person. In the same way, the set (by the always amazing Kate Sutton-Johnson) goes on a journey as well. It starts very realistic but suddenly walls are rotating during transitions, jutting out for new locations, furniture sliding on and off stage - all with great lighting by Barry Browning, perfect sound design by Sean Healey, and fantastic projections by Daniel Benoit. What starts as one thing, ends as another. David starts as one thing and with a great magical realistic ending...well...go see for yourself.


I may say this too much but I can't think of a better cast. Emily Gunyou Halaas (looking like a young Patti LuPone) plays David's twin sister Sarah practically perfectly. There is a comfort between she and Kasey Mahaffy in their conversations and interactions onstage. Kasey is...well my initial notes say 'I can't even" so that says something. He is funny, moving, honest to the character, truthful and open. David's best friend Zachary is played by the extraordinary Michael Wieser. He is funny, stunning, sassy, and though his character may be on the outrageous side, he is solidly grounded and so clearly loves David. Patrick Bailey as Frank is also grounded and grounding. He seems to be a touchstone for David, someone who has been there for a long time and has helped David grow into the person he is. Bailey is wonderful and funny. Bringing magic to the stage is Michael Hanna as Benoît--brilliant in English and French--challenging David and yet remaining totally true to his character. Hanna and the rest of the cast are perfect really. Part of the perfection is the direction by Jeremy B Cohen. He kept the show moving, consistently real and truthful, finding time and place for humor and emotion helping make it a perfect production.

Le Switch plays at the Jungle Theater through July 31. Go see what I consider to be a perfect play in a fantastic production.
Posted by KRL