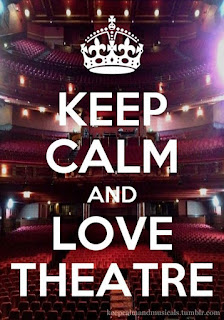 2018 was another amazing year in Minnesota theater. After voting for the Twin Cities Theater Bloggers Awards (4th annual!), we still had a bit to say about what we loved this year.

Favorite Way to Visit New Places: Site-Specific Theater
This year alone we saw High Fidelity at the Electric Fetus, Thomas Tallis in a church, Trojan Women at a taproom, Our House: A Capitol Play Project at the State Capitol AND The Haunting of Hill House AT. THE. HILL. HOUSE. Like you can get any better than that? Every one was beautifully produced in a setting that made the work even more meaningful and compelling.

Favorite Voices: #ownvoices
2018 was a truly outstanding year for plays by women and writers of color this year. A few that stood out for us included Leah Nanako Winkler's genius comedy Two Mile Hollow, the heart-rending This Bitter Earth and the new musical Five Points by Harrison David Rivers (Penumbra Theatre and Theater Latte Da), the charming and personal Caucasian-Aggressive Pandas and Other Mulatto Tales by Derek "Duck" Washington (Chameleon Theatre Circle), the inventive The Korean Drama Addict's Guide to Losing Your Virginity by May Lee-Yang (Theater Mu), the astonishingly well-written The Wolves by Sarah DeLappe (Jungle Theater), the beautiful As One by Laura Kaminsky (Skylark Opera), and the staggering Prescient Harbingers festival at Mixed Blood Theatre. Take THAT, David Mamet and Richard Greenberg. Neil LaBute? You know I have nothing to say to you.

Minnesota Theater Love All-Stars: Jamecia Bennett and Paris Bennett
The fantastically talented members of the Bennett family each provided a fantastic musical theater moment this year. Paris Bennett, who starred in Children's Theatre Company's The Wiz sang "Home" at the monthly cabaret show Musical Mondays in January. In the intimate, crowded back room at Lush, Paris sang the HELL out of that song with such beauty that we don't have words to describe it, but can still remember it perfectly a full year later. Her mother Jamecia Bennett played Sister Rosetta Tharpe in Park Square Theatre's Marie and Rosetta and gave an amazing musical performance through the entire show. But the show's 11 o'clock number brought the house DOWN. When she sang "I Looked Down the Line," she sang it with her whole body. We wondered how she does it, and how on earth does she do it multiple times per week. Jamecia Bennett's voice is a gift from God, but an incredible testament to training, discipline and technique.

Favorite Way to Be Stronger: Together (aka Theater Ensembles)
Choosing the Twin Cities Theater Bloggers awards were particularly challenging this year. So many shows featured an amazing group of actors, comedians, and musical theater performers that created magic as a collective. How do you choose your favorite comic actor from Ten Thousand Things' Park and Lake, Theater Mu's Two Mile Hollow, and everything Blackout Improv does. On the musical side, Theater Latte Da's Assassins and Once had ensembles that created a transcendent musical experience--as did Orchard Theater Collective's Thomas Tallis and Minneapolis Musical Theatre's High Fidelity (albeit in very different ways). Other ensembles that showed the virtue of thoughtful casting and phenomenal direction include The Wolves (Jungle Theater), The Skriker (Fortune's Fool), Trojan Women (Mission Theater), and Frankenstein: Playing with Fire (Guthrie Theater).

Favorite Number: Two (as in Two-Hander)
Some plays this year showed how remarkably intimate theater can be when it's performed by just two skilled actors in a well-written play. A few we particularly loved: Gremlin Theatre's A Steady Rain (Peter Christian Hansen and Dustin Bronson), Penumbra Theater's This Bitter Earth (Jon-Micha!el Reese and Kevin Fanshaw), and Marie and Rosetta (Jamecia Bennett and Rajane Katurah Brown). Very honorable mention to Skylark Opera's As One (Bergen Baker and Luke Williams) and to The Longest Night at Open Eye Figure Theater (Bradley Greenwald and Sonja Thompson).

Favorite Opera Trend: NEW
Yay new opera! Sure, everyone loves the old classics, but when a new opera is done well, it gives us hope for the future of society. Here are some new operas that we loved this year: Dead Man Walking at Minnesota Opera was based on the book by Sister Helen Prejan and handled unbelievably hard issues with grace and thoughtfulness. Skylark Opera gave us As One, which created a beautiful, heartrending story of a transgender youth (Hannah before and Hannah after) in a spare, small setting. Minnesota Opera staged the lovely Fellow Travelers at the Cowles portrayed a love affair between two men in 1950s Washington, DC and the "Lavender Scare."

Favorite Random: Uncategorizable  and Unforgettable Shows
What else did we love? Y'all, we loved Dance 'Till You Drop by Collide Theatrical at History Theatre. This tale of a dance marathon featured a universally endearing cast, excellent characterization and amazing dance.

Ooh, Robert Lepage's 887 at the Walker Art Center was a once-in-a-lifetime theatrical experience. Watching Lepage wander through his personal memories accompanied by the most inventive theatrical magic we've ever seen was fantastic.

And yes, Minneapolis Musical Theatre's High Fidelity at the Electric Fetus. Genius all around. Terrific cast, beautifully staged and wonderfully sung and performed. And it was in a record store!

One more: Mixed Blood Theatre's Prescient Harbingers festival. This series was three plays written by African-American provocateurs and performed in repertory. We saw all three plays on the same day and were STAGGERED by the craft and content. The three plays were Gloria by Branden Jacobs-Jenkins, directed by Lavinia Jadhwani, Hype Man. A Break Beat Play by Idris Goodwin, directed by Shawn LaCount, and Hooded or Being Black for Dummies by Terrance Arvelle Chisholm, directed by Thomas W. Jones II. All were fantastic and thought-provoking and wonderfully acted, particularly by William Thomas Hodgson, Nathan Barlow and Kathryn Fumie.

To sum up, we saw approximately 114 shows in 2018, which included:
Whew! Hope you had an amazing year in theater as well and here's to many more fabulous shows in 2019!
Posted by Carly