Bluebeard's Dollhouse is only the second full-length production from Combustible Company, but it's an ambitious, eerie evening you won't soon forget.

The promenade-style production ranges around the Minnesota Historical Society's James J. Hill House in Saint Paul, a perfect location for something a little creepy. This intimate, immersive experience isn't a play, exactly, as it is non-linear. The order in which you see the scenes depends on which group you are part of.

Director Kym Longhi makes good use of the Hill House, setting scenes on three floors in a number of rooms (and a few hallways). The audience is divided into smaller groups, some as few as 6, some of which joined and split again into different combinations throughout the evening. It does feel like a full evening, though it only runs 75 minutes. But it covers so much ground, and there is so much to take in, that time becomes irrelevant. I was totally engrossed in the discovery of the next new scene. 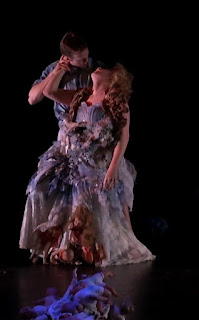 Each group is guided by an ensemble member from one performance space to the next. Though the performers are engaging, interacting is not really required (whew!). With lights, sound, music, dance, storytelling, and film, the company of eleven players spin scenes that combine elements of two stories: A Doll's House, in which Nora feels trapped and not in control of her own life or even her actions, and the folktale of Bluebeard, whose newest wife discovers the bodies of his previous spouses when she enters a forbidden room.

The performers play variations on the two pairs of spouses, with recurring motifs of the key to Bluebeard's mysterious room and the suitcase that Nora will take away from her dollhouse. And dolls. Lots of dolls, many of them creepy, just waiting in an alcove for you to spot them. The overall effect is spooky and creepy, as is the atmosphere of the show. The characters all seem ghostly, as though they may be restless spirits reenacting scenes they lived long ago.

This is a hard show to describe, since it's less about story and more about atmosphere, but I thoroughly enjoyed being immersed in its world. It was a great kickoff to the festive Halloween season, and a fun way to see the Hill House again!

Bluebeard's Dollhouse runs through October 15 at the James J. Hill House. Reservations are strongly advised, as capacity is limited, but there are two shows most nights, at 7:30 and 9:30. You'll be climbing stairs and sometimes standing, so wear comfortable shoes. I suggest brushing up on the source material before you go (I wished I had).