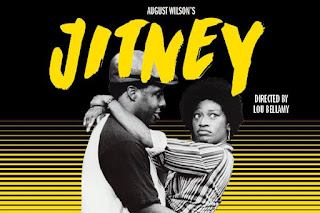 If you haven't yet seen Jitney at Penumbra Theatre, you just got another chance. The show just extended through November 13, so get your tickets now. Go ahead. I'll wait.

Of course, Penumbra has a long history with August Wilson's work, and put on one of the first productions of Jitney in 1985. The show was last seen on this stage in 2000. The new production is as close to perfection as I can imagine.

Over the years, Wilson continued to revise the script, which tells the story of an unlicensed cab, or "jitney" station. The drivers provide a service to the African American residents of Pittsburgh's Hill District, where licensed taxis refused to go. Wilson's story is a masterful work of drama that draws the audience into the lives of its characters without judging them. The naturalistic dialogue allows the story to unfold without obvious exposition, allowing the characters to reveal themselves gradually.

Penumbra's production is loaded with Wilson veterans, starting with Penumbra founder Lou Bellamy's sure-handed direction, showing us living, breathing people rather than types, each with his or her own quirks and issues. James Craven is the heart of the show as Becker, the leader of this confederation. Unlicensed they may be, but the drivers out of Becker's station are held to his rules, which make the operation more professional and reliable. The most outspoken driver is Turnbo, played by Penumbra founding member Terry Bellamy as a man with an opinion on everything and everyone, who loves to spread gossip.

Darrick Mosley is Youngblood, who is working several jobs while putting together the funds to buy a house, which he keeps secret from his girlfriend Rena, the mother of their two-year-old son. Jasmine Hughes is believably exasperated as Rena, who is not willing to put up with any nonsense. The voice of reason when tempers flare is Doub, played by another founding Penumbra member, Abdul Salaam El Razzac. His Doub has the calm presence of a man who has experienced a lot of life and learned what not to get worked up over.

Marcus Naylor plays Fielding, a driver who is a cheerful drunk with an underlying well of regrets. Longtime Penumbra company member T. Mychael Rambo is both delightful and heartbreaking as Philmore, a regular passenger and friend to the crew, and company member Kevin D. West plays Shealy, a fast-talking bookie who takes calls at the jitney station in spite of Becker's complaints. The ensemble is rounded out by one more company member, James T. Alfred, who arrives well into the story as Becker's son Booster, who has just been released from prison.

Every one of the actors is perfect, each presenting a real, rounded person who, even if we don't spend much time with them, we know are complicated people with a lot on their minds. The authenticity of the personalities on stage is supported by Vicki Smith's exquisitely detailed set and Sarah Brandner's properties, which place us in a battered storefront in 1977, and by Mathew LeFebvre's costumes, which recall the time perfectly without being cartoonish or unreal. As a child of the '70s, I recognized the styles, the fabrics, the flares and wedges, all of which looked lived in. The environment is perfectly run down, from the decrepit couch to the mismatched chairs at the metal folding table and the pay phone on the wall Martin Gwinup's sound, including perfect but not predicable music, and Don Darnutzer's lighting, complete the feeling of being immersed in this time and place.

The amazing attention to detail doesn't feel fussy, but it allows the characters and their trials to attain a realism I have seldom seen on the stage. It is a testament to the production that I was able to watch so many familiar faces on stage and to really see past the actors to only focus on the characters, without seeing echoes of previous roles and productions I've seen and admired them in.

Although the physical production grounds the story in 1977 Pittsburgh, the people and the things that happen to and around them are completely relatable and transcend the time period. Gentrification is still an issue in our cities, and people are always struggling to understand their place in the world and how to improve it and deal with their relationships while making ends meet. People everywhere try to define themselves outside of their family and their history, and carry the weight of others' expectations and assumptions.

Above all, Jitney is a play about humanity, which it demonstrates through every word and action. Penumbra's production is a singular opportunity to see this August Wilson masterwork performed by an ensemble that understands his material inside and out. It might be the definitive production of this essential play by one of our greatest American playwrights.

If you're a fan of Penumbra's work, you will have seen this production. If you have not seen what this company can do, or if you wanted to see more of August Wilson's work, but didn't know where to start, this is the time and place to dive in. I could say many more wonderful things about this show, but the message is simple. See this play.
Posted by Jules