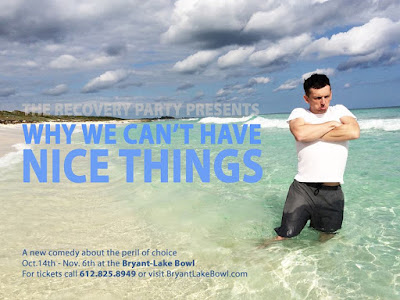 Why We Can't Have Nice Things is the first show I've seen by The Recovery Party. Playing through November 6 at Bryant Lake Bowl, the show is sharp social satire with occasional flights into the absurd.

This collection of comic sketches is formally titled Why We Can't Have Nice Things (or: The Peril of Choice), and this theme recurs throughout the show, from complaints about the excessive variety of Oreo cookies available to the number of names for the devil. Mostly, the humor revolves around modern life in today's United States, not shying away from the deep divides we are experiencing.

It's a little odd in 2016 to see a show dealing with contemporary issues featuring such a homogenous cast, but the group leans into the choice, spending most of the show in identical black slacks and white shirts. They do have the grace to acknowledge that today, it's a little uncomfortable to be seeing five "old white guys" putting on a show. But they are very talented and funny guys who workshopped Joshua Will's script into a swift and entertaining evening.

Writer Will, who also directed, presents a snappy series of highly literate sketches. As a grammar nerd, I was particularly entertained by jokes about language and etiquette. Will reminded me a bit of Saturday Night Live's Seth Meyers, not a bad reference for a comedy show.

Dennis Curley provides musical accompaniment and cheery original songs, as well as a recurring portrayal of the devil as a man frustrated by the difficulty of finding reliable minions to do his bidding.

Jim Robinson is convincing both as a disgruntled biology teacher forced to teach alternatives to evolution, and a guy no one wants to be in the steam room with. In another comedy reference, he bears an interesting resemblance to Fred Willard.

Eriq Nelson showed a sly wit, often providing an unexpected twist on the proceedings. Even when things go slightly wrong, he keeps it funny.

Jeffrey Cloninger commanded the stage whether complaining about cookies or accidentally losing his soul by not reading the fine print.

Throughout, we are reminded, not-so-subtly, that we all have a choice to make in November and the show's viewpoint is fairly obvious. But it's not didactic or preachy. Running a tight and sharp 90 minutes, ... Nice Things has a lot of laughs about things that are on all of our minds. And it's good to laugh when we can!