Twin Cities Horror Festival V: The Philip Experiment by The Importance of Being Fotis 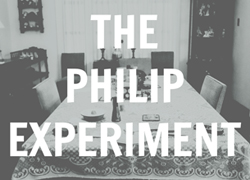 What's It About: "In 1972, a group of scientists and paranormal researchers embarked on a study that they thought would change the world of parapsychology forever. It was called, The Philip Experiment."

The Importance of Being Fotis has a long history with the Horror Festival and with the Minnesota Fringe Festival, and it shows. We were creeped out by their entry in TCHF IV, The Trail, and entertained by The Farmhouse during TCHF III. So we made sure to catch The Philip Experiment.

Right from the start of the play, the laughs start with the framing device of a Rod Serling-esque narrator presenting a mindbending story. The self-important host (Joe Bozic) is hilariously over the top, and keeps popping back into the story. The plot, in which a group of researchers (Debra Berger, Heather Meyer, Mike Trost and Lucas Vonasek) deal with the consequences of a long-ago experiment, suggests a number of possible realities, which may or may not all exist. Or not.

The Philip Experiment questions the nature of reality and might make you wonder if you are actually in a theater, watching a play. But each unsettling scenario has a lot of humor in it, It's super-entertaining, whether you follow the twists and turns of the narrative or not. And everyone in the show is terrific, with fantastic comic instincts.

If You're Sensitive and/or Delicate: No worries about gore, though the body count is pretty high.

In Short: As in past years, don't miss the Fotis show. The balance of existential dread and humor is just perfect.
Posted by Carly