Review: From Darkness at Nimbus Theatre

This is the first Nimbus Theatre show I have seen and I look forward to seeing many more. The company was founded and is led by playwrights, and is run by the artists themselves. The company focuses on the collaborative creation of new work. In this day and age, new work is exciting, needed, and a bit dangerous (as an audience member you never know what you are going to get). However I feel that it is necessary for a lot of creative types to learn to create new work, and it is essential for audiences to learn to try out new work. After all, you don't know if you will like it until you try it. 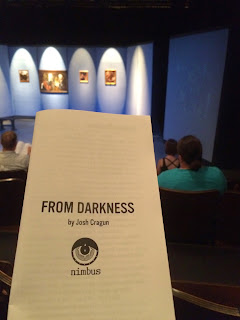 I walked into From Darkness with the knowledge that it was about art, creation, and possibly forgery. I honestly wasn't sure. What I walked away with was a deeper knowledge of certain aspects of art, art history, the post-war New York art scene, and some aspects of forgery. The underlying story (from my view) was about Stanley Mansfield - an artist who was coming into his own at the same time as Jackson Pollack, Lee Krasner, and Willem de Kooning. This was the start of the Abstract Expressionism which was the first specifically American art movement that achieved international influence. Helping this movement was a gallery owner named Betty Parsons. She was one of the first advocates for these artists and had great effect on the art world. As pure contrast, and a really fun scene, there is also some stage time for Andy Warhol and his Factory.

Over this fascinating history is the driving story of a possible forgery found at the Metropolitan Museum of Art in New York City. The forgery story is based around a painting by Caravaggio, specifically The Denial of St. Peter. The play switches back and forth between the past and the present, building to a fascinating and exciting ending.

The eight-person cast covers multiple roles, each character distinct and individual from the others. Despite some possible opening night jitters, it was clear that the cast is a strong cast, really invested in telling this story. More than that, it was clear that they enjoyed telling this story. The stage had screens on both sides, as well as walls that turned and folded into themselves creating various locations. With the simple addition of a block or two, or some benches and you went from a gallery at the Met, to a bench in the park, a happening at the Factory, and even a cheap bar as well as a few very posh houses. The set design by Brian Hesser was perfectly suited to this slightly sprawling tale. The screens on each side were used to help set a time and place for each scene, as well as providing visuals during scene changes. It was also used to provide examples of the art during certain scenes. It worked well though I think there were some lost opportunities. There are at least two instances where actors were facing the audience while "looking" at a painting and talking about it. It would have been helpful to me, as an audience member, if I would have been able to see the painting they were discussing. But that is a minor detail.  The costuming by Andrea M. Gross and lighting by Brent Anderson suited the work perfectly. The sound design by Jacob M. Davis helped keep the scene changes interesting as the music choices were great. And I really want to call out Ursula K. Bowden for re-creating some really nice works of art, though hopefully calling her out as "Master Forger" in the program won't attract too much attention from the wrong sorts of people. 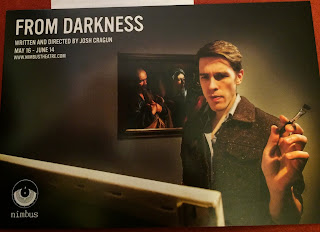 The staging and direction was pitch perfect. It kept the action moving. This can be tough for a show that runs 2.5 hours with an intermission. However it covers a lot of ground, from the historical background to the ongoing questions of what is art, the meaning of art, why artists create, and even if there is a true American art style. Fascinating and intriguing questions that are answered as well as they can be through out the show. There were a few times I felt that pacing was slow, but I am attributing that to opening night jitters. I also found it odd that there were quite a few folks smoking on stage, yet never any smoke. I won't say it was distracting, but clearly it caught my attention. What I will say is this. It can be challenging to navigate and direct a show that is created collaboratively, and I believe that Josh Cragun has done a fantastic job at that. Especially on a new work that has a lot to say.

If you are at all interested in learning about art and American art, or even curious about art forgeries - this is the play for you. If you want a really good time in the theatre, this show is also for you. It was interesting, exciting, and illuminating. Keep your eye on Nimbus Theatre - I know that I will.
Posted by KRL