What an amazing place we live in. Where we can go from seeing a brand new play on a Saturday night in the midst of Art-a-Whirl, to seeing an internationally acclaimed mezzo-soprano on Tuesday. The amazing Joyce DiDonato gave a recital as part of the Schubert Club at the Ordway Center for the Performing Arts. She was, in a word, glorious. 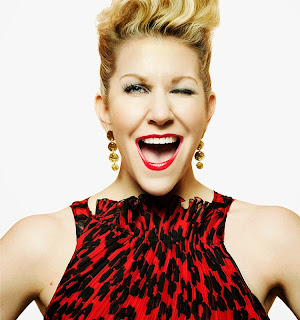 She opened the first portion of the recital with "Canciones clasicas espanolas" by Fernando Obradors. Seven songs in Spanish that showed her range, not only vocally but in character. Each song was not sung, but performed. With the amazing David Zobel on piano, each song had a story to tell, a character to show. I had never heard of this composer and was really charmed by this selection of songs. Obradors had written four volumes of "Classical Spanish Songs", and this was the first volume. It was a perfect opening to warm up the audience to what they could expect for the remainder of the recital. Following that, she went back to an earlier composer, and one which she is probably better known for - Rossini.  She sang the "Willow Song" from Otello and it was beautiful and moving.

She ended the first half of the recital with a Beaumarchais Trilogy - three songs from two operas based on the plays of French writer Beaumarchais. The first two were from Le Nozze di Figaro by Mozart, and the final from Il barbiere di Siviglia by Rossini. The first aria was "Voi che sapete" from The Marriage of Figaro. This was sung by Cherubino which is a pants role (woman playing a man), and Ms. DiDonato clearly had fun singing it. Following this was a beautiful and charming aria "Deh vieni, non tardar" also from the same opera. She ended the trilogy with "Una voce poco fa" from The Barber of Seville. While this is a very well known aria and performed often, I had mainly only heard the recordings of Callas. It was a true joy to hear a different take on the aria.

I'm going to pause here because here is the thing about recitals. The music is wonderful and the performance is brilliant. But what about the visuals? For those of us who love theatre and opera, sometimes the visuals can be missed in a recital. The main stage of the Ordway was turned into a perfect recital hall with dark brown back walls. A single piano in the center, and a wonderful singer. You can't ask for much more. Yet, I feel like I need to write some about what DiDonato was wearing. The first half of the recital she was in a beautiful pale green gown (see below). It was strapless with a gather at the left front side giving some movement to the gown. She had a gorgeous v-shaped necklace as well. For the second half, she came on in a stunning multi-color dress. The dress was form-fitting, full length, and had long sleeves. Trust me, it was much more fun to watch than a simple tuxedo on any male performer. 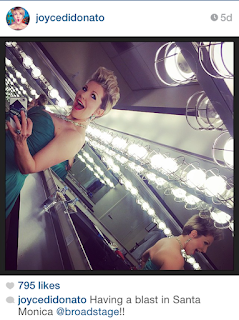 Speaking of the second half, she started it with two arias from Cleopatra. The first was from Marc'Antonio e Cleopatra by Hasse, while the second was from Giulio Cesare by Handel. Listening to her fluid runs and trills during these two pieces, this is a style of music almost written for her voice. She showed so much control yet wasn't holding back either. They were and are fantastic showcases for the magic that is her voice, and the training and experience she has had. The recital closed with another song-cycle, "Venezia". This one was by Reynaldo Hahn, and is originally seven songs about Venice. She performed six of the seven. She stated before starting that this set of songs really opened her up to the power of music when she first discovered them. She was enthralled with how evocative the lyrics and the music were. I can attest that it is true. It is a gorgeous song-cycle that I will be listening to more.

And that was the program. Of course, after the last note started to fade, the first of many standing ovations began. The first of many you say? How can that be? Well...when there are three encores, the audience is given plenty of time to applaud and show their love and appreciation. The first encore was from La Donna del lago by Rossini. I am not sure of the specific aria, but it was beautiful. Another standing ovation and she came back on to seeing a Neapolitan Art Song called "Don't Forget Me." She stated that she felt a bit selfish saying the title, which gives you an idea of her charm and sense of humor (she did name a cd "Drama Queens" after all). Again, this was a very moving and beautiful piece.

Her final encore may have been a tribute to Minnesota. She spoke earlier before the second encore of her travels here before starting college. She stated that she was looking at St. Catherines and wondered a bit about the possibilities. When she came back on for the last encore, it was a simple song, a familiar song, and the perfect song to end the evening - "Over the Rainbow" by Harold Arlen. To make it more perfect, David Zobel added a few notes from "Una voce poco fa" at the very end.

If you have a chance to see Joyce DiDonato perform, please take that chance. Either live on tour, or in some of the numerous "Live in HD from the Met Opera." You will not be disappointed. If you want to hear some samples of these pieces, you can find them on I-tunes, or Classical Archive.
Posted by KRL