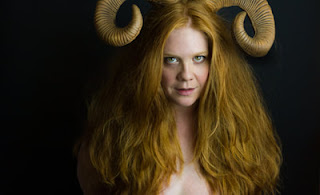 What's It All About:
"After the death of her Grandmother, an American woman travels to an abandoned island off the coast of Scotland and unearths a dark family secret. St Kilda is a new horror play/theatrical mono-concert written and performed in near darkness by New York-based award winning theater artist Jody Christopherson."

What We Thought:
Atmospheric and dreamy, St Kilda is a unique theatrical experience. Alone on a bare, dark stage, Jody Christopherson (who also wrote the show) tells the story of journeying to the mysterious Scottish island of her beloved late grandmother's birth. St Kilda uses looping audio, interspersed recorded voices in conversation, and haunting song snippets to build an uncanny, unsettling story (and world) of secrets and mystery.

New York-based performer Jody Christopherson is an engaging storyteller, and her technical mastery is impressive as she manipulates her microphones, recorders and sound effect props to create this story. Although seeing the machinations steals a bit of focus, she creates a wonderfully magical soundscape. St Kilda is directed by Isaac Byrne, with Foley and sound design by Andy Evan Cohen, and you can check out this preview to get a sense of her work.

The setting Christopherson chose is a particularly intriguing one. According to the program, "St. Kilda is very loosely based on historical facts surrounding the evacuation of St. Kilda's only inhabitable island, Hirta, on August 29th 1930, following the death of 22-year-old Mary Gillies." Atlas Obscura provides more of the story: "Their lives had become unsustainable in the face of modernity and a rapidly diminishing population. The evacuation took place on August 29th that same year, when a ship called Harebell took the remaining villagers to their new homes in mainland Scotland. The villagers left behind a plate of oats and an open Bible in each cottage before boarding the ship." Fascinating!

Mysterious Scottish island? Of course this show reminds us of one of the greatest horror films EVER: The Wicker Man (1973). Won't some local theater company do a production of this? Or at least a concert of the amazing soundtrack? Please?