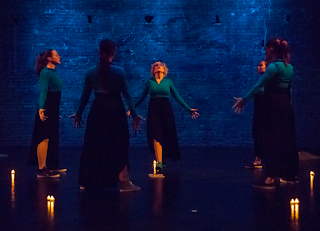 What's It All About:
"Book of Shadows II revisits the underlying theme of witchcraft from the first Book of Shadows, exploring more facets of magic through dance and storytelling. Dances delve into dark magic and the horrors that await when tampering with the unknown. Taj Ruler casts more delightful spells written as a young tween witch, which are interspersed between dances. Sometimes magic is the only way to get what you truly want.'

What We Thought:
Discovering the work of Erin Sheppard Presents has been one of the best things about the Twin Cities Horror Festival. Not being particular dance fans, we might not have checked out her work if not for TCHF. We caught Erin Sheppard's work back at TCHF V with Book of Shadows and loved last year's After the Party and have been avid fans ever since.

Book of Shadows II was listed as a sequel to the first, which, in addition to dance, featured stories by Taj Ruler. This time around, Heather Meyer (creator of the legendary Women's History Month: The Historical Comedybration) tells a story called The Five Tools of Sophia Turnbolt, about a girl who longs to become a witch. The dance numbers are a bit less related to the narrative than in past shows we've seen by Erin Sheppard Presents, but are still fantastic. We love Erin Sheppard's musical choices, which are delightful, and her dances are modern and fresh. The dancers (sporting AMAZING E.S.P. jackets) are strong and versatile, and portray emotions from humor to love to menace with equal skill.
Posted by Carly