The How and the Why - Theatre Unbound at New Century Theatre 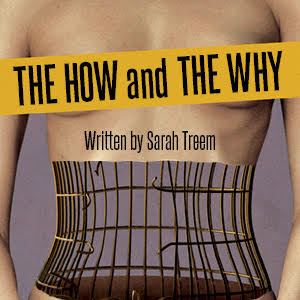 Theatre Unbound, according to their website, "delivers thought-provoking live theatre conceived and created by women, providing audiences with engaging, rarely-seen perspectives on issues that are relevant and universal."

Their new production, The How and the Why at the New Century Theatre, continues that mission. Playwright Sarah Treem has created the story of two women of different generations who relate to each other through their respective scientific research.

Zelda (Caroline Kaiser) is a respected evolutionary biologist and the author of the Grandmother Hypothesis, which suggests that menopause evolved in humans so that the elder females could help to care for their children's children. Rachel (Molly Pach) is a doctoral candidate working on her own theory to explain menstruation. Not the "how," she clarifies, as the mechanics are well understood, but the "why" - What could be the scientific reason that it happens as it does in humans?

I won't go into detail, though the show does. These are actual scientific theories which the playwright borrows as a jumping-off point for the characters, who explore women in science, career vs. relationship issues, family connections, and more, It is a lot of ground to cover in two hours (with an intermission), and sometimes the play feels as though it is racing to get all of its ideas presented.

Zelda is on the board of a respected scientific conference, which Rachel applied to and was not accepted. The play starts with their first meeting, and the second act happens a few weeks later, after the conference. This doesn't seem to give the women enough time to develop much of a relationship, and personal revelations seem to be dropped in at regular intervals, whether warranted by the context or not.

Treem's script treats these revelations as surprises, although for the most part, they are overly telegraphed and a bit soap-opera-ish. The idea behind the play is interesting, as is the scientific discussion, but it might have been better served to be less ambitious. Possibly, director Shelli Place and the actors could have elevated the play, but in the end I think it bogged them down.

If you are interested in the science behind the play, there is a wonderful study guide put together by Chicago's TimeLine Theatre for their 2014 production that is a good starting point for further research.
Posted by Jules