The Dutchman and the Owl Answers - Penumbra Theatre 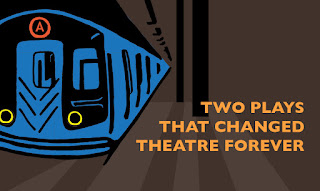 Let me just say this: Penumbra Theatre's study guide for The Dutchman and the Owl Answers: An Evening Of Obie Award-Winning One Acts is seventy-eight pages long.

My point is this: This ain't no Harvey. These works are challenging and formidable, and performed together, they create an evening of theater which you will not soon forget (runs through March 27, btw).

I went in knowing very little about either play. I left wanting to know much more about the plays, the authors, their work and impact upon American theater. I will give you this, from the co-artistic directors: "While one playwright reveals the absurdity of structural racism by evoking a nautical ghost story, the other uses absurdism to explore internalized racism."

(If you prefer to know more going in, Marianne Combs on MPR recently had a short piece on the plays that gave a nice introduction to the work, which I'd recommend.)

The first of the two one-acts is The Dutchman, which was written in 1963 by controversial poet and writer Amiri Baraka (aka LeRoi Jones) and directed by Lou Bellamy. Set on a subway car, this is essentially a two-hander where Lula, an overtly sexual white woman (Katie Guentzel), alternately seduces and insults Clay, a buttoned-up, suit-wearing young black man (Nathan Barlow).

Complicating the already complicated relationship between these two characters is that fact that Lula is beyond unbalanced, which makes the play difficult to watch. By the time Clay finds his tongue, the play has lost me. Also, subway poles are filthy; I would not recommend swinging about on them like a stripper pole.

This play made me wonder when exactly the concept of Manic Pixie Dream Girl began. (According to a very fascinating Wikipedia entry, a lot longer ago than I thought.) Defined by film critic Nathan Rabin, the MPDG is "that bubbly, shallow cinematic creature that exists solely in the fevered imaginations of sensitive writer-directors to teach broodingly soulful young men to embrace life and its infinite mysteries and adventures."

The other pop culture reference that came to mind while watching this was Spike Lee's 1991 film Jungle Fever. From Roger Ebert's review: "Jungle Fever is Spike Lee's term for unhealthy sexual attraction between the races - for relationships based on stereotypes. Too often, he believes, when blacks and whites go to bed with one another, they are motivated, not by love or affection, but by media-based myths about the sexual allure of the other race."

Let's just say: There's a lot to unpack in this short one-act. (Resources for assistance with that are below!)

After the starkness and realism of The Dutchman, The Owl Answers is like a fever dream of a play. Written by Adrienne Kennedy in 1960, this play shared the 1964 Obie with The Dutchman. Directed by Talvin Wilks, The Owl Answers takes the subway car from The Dutchman and metaphorically (and literally) turns it on its side. To give you a sense of the departure from the first play, here's the setting (from the Study Guide mentioned below): "The scene is a New York subway is the Tower of London is a Harlem hotel room is St. Peter's. The scene is shaped like a subway car." Follow that?

Austene Van gives a mesmerizing, faultless performance as a mixed race woman who has lost herself to delusions featuring Shakespeare, Chaucer, William the Conqueror, her father's dead body, her mother, Anne Boleyn, and yes, an owl. Beautifully performed and conceived, The Owl Answers is like a sweet, surreal dream, and features strange and wondrous performances by Jamecia Bennett, H. Adam Harris, and Neil Hazard. No less challenging than The Dutchman, both plays offer much food for thought and discussion.

Talvin Wilks's interview in the Study Guide is a must-read. A taste: "I said to the actors the first day, it’s very important to say 'Do not make this a period piece. We may be setting it in a particular time, but it is about the now, it is about Black Lives Matter, it is about an all-white Oscars, it is about who can play what role and why, it is about all of those seemingly inane popular culture things that reflect a truth about the way we still deal with race and culture and identity in this society.'"

This is one of those nights of theater where a post-show discussion is practically required. You can catch post play discussions on March 10, 17, & 24, 2016 and discuss issues of black art and connections to community.

Another interesting event that Penumbra is doing is called Bookends, where you can learn more about the play by reading the script, then seeing the play and discussing the issues. (March 7 & 21, 2016, 12:30 pm to 2:30 pm).

Want to do a little research on your own? Start with the aforementioned comprehensive and fascinating Study Guide, available on Penumbra's website. I love their disclaimer: "The Study Guides are meant to stimulate discussion, not to present a definitive voice or the 'right answer.' Theatre is fluid, active, interactive and reactive; we must engage it intellectually that way too."

The study guide includes information on Penumbra's season, artistic process, and a short history of African-American theater. For both of the one-acts, the guide includes information about the plays, the authors, and contextual essays on their work, as well as interviews with the directors and background on the set and costume designs. Did I mention the 78 pages? Whew!

And finally, my customary push for Penumbra Theatre. From the intro to the study guide:

At Penumbra, transformative art illuminates ways to move humanity forward with
compassion – join us as we move from empathy to action, from emotion to solution. Ours is a brave, honest, intelligent, responsible, and hopeful community and there is a place for you here. Welcome.

In these tenuous, volatile times, the work that Penumbra does is vastly important to our theater community and to our community as a whole. Go see their shows, donate, and support this necessary work.
Posted by Carly