The Shape of Things - Daleko Arts 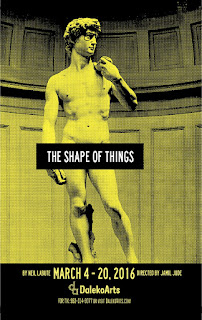 I love a good theater resolution. Last year, my goal was to go to more small theaters. This year, I'm resolving to get out of the Twin Cities.

I can't think of a better place to start this spring resolution than DalekoArts in New Prague. I love this explanation of the name and a bit of the mission from their program:


"'Daleko' - a Czech word meaning 'far away' - reflects New Prague's strong bohemian roots, its spatial relationship to the cultural hub that is the Twin Cities, and the ensemble's desire to step back and examine the world from a new point of view.'"

When we heard that DalekoArts was doing The Shape of Things by Neil LaBute, we were so in. Way to swing for the fences! And we were not disappointed.

Playing now through March 20, The Shape of Things is, for a Neil LaBute play, extremely accessible. The "nastiest parts of ourselves" as director Jamil Jude puts it in his Director's Note, are a bit less nasty than, for example, Fat Pig or In the Company of Men.

Director Jamil Jude has put together a tight cast of four actors for this intense story of art and relationships. Artist Evelyn (Cristina Florencia Castro) meets Adam (Mike Swan) at a college art gallery, where she plans to make an artistic statement about censorship using a can of spray paint. She flirts her way into a date with the slightly dorky student, who is soon embarking on a course of self-improvement. Adam's friends Philip (James Rodriguez) and Jenny (Tamara Clark) are not as taken with Evelyn as he is, as her influence starts to change more than his outward appearance.

That's the story, and to tell more would be giving away too much. I'll say this though: The production is well worth traveling to New Prague to see. (Less than an hour from the Cities!)

Although the play originally premiered in 2001, this production sets it in the present day, using artwork from all eras as part of the set, as well as contemporary music and costuming.

The music that plays in between scenes deserves its own ovation. Fun and contemporary, it's a perfect accompaniment to the efficient set changes and scene transitions. (Excellent use of the Klik Klak sofa bed, I have to say.). Also, I need the mixtape based on this show.

This play runs a brisk 90 minutes with no intermission. The dialogue, especially as delivered by Castro and Swan as Evelyn and Adam, flows naturally with excellent pacing. Swan in particular lends an endearing humor to his scenes, and undergoes a believable transformation. Castro, despite an unnerving resemblance to The Good Wife's Sarah Steele, gives a multi-dimensional and sympathetic performance of a character who could be quite unpleasant.

One more tip: Don't rush too quickly out of the theater when you've seen the show. Take a quick left when you reach the lobby. (Not a right, that's the bathroom.) Trust me.

Fun fact: Elvis Costello did the music for the 2003 film of The Shape of Things starring Paul Rudd and Rachel Weisz. Could that film BE any whiter? So pleased that DalekoArts did not follow that lead.