Basement Creatures - In the Heart of the Beast 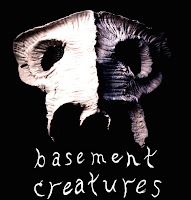 Enormously strange and utterly original, Basement Creatures at the In the Heart of the Beast Theater (HOBT) left me nearly speechless.

Summing it up is incredibly difficult, so I'll let the madly skilled folks at HOBT tell you what it is (and it runs through March 26, btw):

"This wildly original rock opera follows the journey of a subterranean explorer, featuring a stellar live band, haunting choral voices, aerial dance, and puppetry peculiarities from the underworld. Emerging from the sold-out run of performances in Puppet Lab 2015, this expanded production includes your favorite singing centipedes and lonely bedbugs, along with all new monsters from under your bed."

So let's start at the very beginning.

As you enter the theater, mysterious masked figures offer you a glowing "elixir of life." Sipping the elixir, you mill about the area customarily used as seating but now housing the art exhibit "A New Twist on the Old Testament Part II" by Samuel Robertson. Shielding the stage is a large white curtain, with mysterious sounds emitting from behind it. Finally, the gong is sounded and the ushers beckon you onto the stage. Taking a seat on the risers, you settle in.

The lights go down, the band begins and chains rattle as a dark-clad, silent 'explorer' climbs the chains in a lovely aerial dance and descends into 'the basement.' Here she meets (in song!) centipedes, bedbugs, silk spiders, professors and organ surgeons, all depicted by a talented cast of aerialists, musicians, puppeteers, and projectionists. And, of course, she meets the mysterious "basement dweller."

Basement Creatures was created by Lead Artist (and "Basement Dweller") Davey T Steinman, who was inspired by his own childhood and home basements, as well as the "waiting darkness" of Minnesota winters. The show started at the HOBT Puppet Lab fellowship, and an abridged version was produced by HOBT last year. This version is revised and expanded from the original.

As someone who loves musicals and all things spooky, I was all about this show, but had no idea what to actually expect. It's far more rocking than I expected (even though it's described as a rock opera--I've seen too many musicals purporting to be rock operas to trust the term) and far more abstract as well. But when the bedbug started singing "Lonely Bedbug," I was in, and during "Gates of Hell", I was ready to buy the CD. (Which I did, and it's going to add considerably to my Halloween music collection.)

What else? The aerial work is amazing, the puppets are wonderfully creative, and the lighting and projections work beautifully together with the music to create an incredibly original, yet dream-like experience. The show also features the work of Artemis, a vocal ensemble with gorgeous harmonies (playing the part of the pipe organ). Although there was so much of the show that I loved, there were a few bits I just didn't get. In some ways, it still feels a bit like a work in progress, but a fascinating one with even more amazing potential.

And I love that I have a whole new list of talented performers to keep an eye out for in local theater. For one, I'm very curious to see what projections Davey T Steinman comes up with for Carson Kreitzer's Lasso of Truth, an upcoming Workhaus Collective/Walking Shadow Theatre Company production starting April 15 at the Playwrights' Center.
Posted by Carly