Your Guide to Hamilton: Part Two - So Now You're Obsessed

So now you're obsessed with Hamilton! Welcome! Here's a picture of Daveed Diggs holding a puppy. 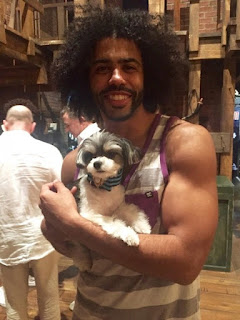 If you do nothing else, scroll down to the adorable videos and then:

Dig Deep Into the Lyrics:

Hamilton (Original Broadway Cast Recording) on Genius - In an interview with American Theater, Miranda said: "There’s lots of [Easter eggs] in Hamilton. I don’t want to give them away, because I feel like Rap Genius is going to have a field day finding them."

Genius, a site dedicated to crowd-sourced annotations of rap and hip-hop lyrics, deconstructs the fascinating true history of Alexander Hamilton, as well as Lin Manuel-Miranda's numerous inspirations, call-backs and references. It is fascinating reading for the Hamilton aficionado. Here's a sample:


"Hamilton does not have an overture. There are eleven notes of orchestral introduction in Hamilton: seven rhythmic orchestral notes in the rhythmic motif of 'not throwing away my shot,' then four string notes inspired by a door squeak. That’s it."

"Our title character finally makes his grand entrance, with a distinctive establishing theme. Just in case you forget the name of our star or aren’t sufficiently ear-wormed by the melody, this motif reoccurs at numerous points throughout the show (spoken 6 times in this cadence by Hamilton himself, and another 9 times by the ensemble). Lin writes in Hamilton: The Revolution (p. 17) that the cadence came to him immediately and that Hamilton has 'an absurdly musical name.' 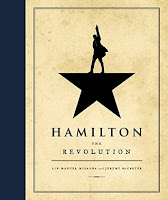 Read More:
Hamilton: The Revolution by Lin-Manuel Miranda, Jeremy McCarter - Hamilton: The Revolution trace its development from an improbable perfor­mance at the White House to its landmark opening night on Broadway six years later. In addition, Miranda has written more than 200 funny, revealing footnotes for his award-winning libretto, the full text of which is published here. (publisher description)

Watch the Documentary:
Watch Hamilton's America - a behind-the-scenes look at the Broadway musical by Great Performances. PBS members can watch it online for free, but there are plenty of fun clips available online.

Spamilton: An American Parody is a musical parody of Hamilton (and a few other shows) written by Gerard Alessandrini, creator of the parody revue Forbidden Broadway. Miss the show? You can still get the recording, which includes numbers like "Daveed Diggs: The Fresh Prince of Big Hair" and "The Film When It Happens." Good-natured fun.

The Legend Continues:
Hamildrops: Lin-Manuel Miranda is dropping new Hamilton content every month between December 2017 and December 2018. Hamildrops so far include unused songs and lyrics, mashups, and collaborations with artists like Mobb Deep, Ben Platt and "Weird Al" Yankovic. As Lin said in a tweet: " I STILL HAVE ALL THIS DOPE NEW SH*T TO SHARE WITH YOU."

Hamilton Rabbit Hole:
TV Tropes is an "all-devouring pop-culture wiki, catalogs and cross-references recurrent plot devices, archetypes, and tropes in all forms of media." And yep! They have a Hamilton thread and it is delicious, addictive fun. Examples:

JUST ADORABLE HAMILTON VIDEOS TO WHET THE APPETITE:
Prepare to fall down the rabbit hole with Ham4Ham. What started as just a fun way for the Hamilton cast to entertain the crowds of people waiting outside the Richard Rodgers Theatre to enter the Ham4Ham ticket lottery, turned into a remarkable platform to celebrate the talent and community of Broadway with fans worldwide.

Vulture did an amazing compendium of the videos, and  you can see all of the videos on Lin's website. Here are a few of our very favorites:

This is EVERYTHING. If you watch only one video, make it this one. Hamilton’s three King Georges — Brian D’Arcy James, Andrew Rannells, and Jon Groff — lip-sync as “the Schuyler Sisters” with Renée Elise Goldsberry taking over as Aaron Burr. WORK!

One of the most beautiful things about Lin Manuel-Miranda is his support of theater and other theatermakers. His Ham4Ham featured a ton of performances by cast members of other shows on Broadway, such as this performance of "Carnaval Del Barrio" by the amazing Andrea Burns and the company of On Your Feet.

How about this one? Elmo and Chris Jackson. SO cute. "Apple juice!"

How about the Cabinet Battle performed in the actual West Wing of the White House? Bonus: Daveed Diggs in glasses.

Cherry and Spoon's Challenge to Twin Cities Theater Artists
In response to Miranda's #Ham4All challenge, which featured celebrities and normal people posting a video of themselves singing a song from Hamilton, donating $10 to the Immigrants We Get the Job Done Coalition, and challenging two others to do the same, noted local theater blogger Cherry and Spoon called out Twin Cities Theater Artists to participate. The amazing results are here on her blog.

In short, Hamilton really seems to have permeated popular culture, hasn't it? YOU HAVE NO IDEA. TV Tropes catalogs a number of the Hamilton Memes. My all-time favorite? 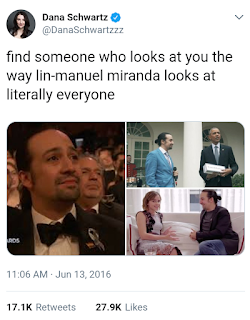 So now you're obsessed with Hamilton. When you're ready, feel free to move on to In The Heights, Lin's first musical: Why I Love In the Heights (and you should too).

Don't forget to check out our other Hamilton posts:
Part One: What You Need to Know
Part Three: A Personal Note

Happy Hamiltoning! You know you want to be in the room where it happens.
Posted by Carly