The Baker's Wife at Artistry

The Baker's Wife, now playing at Artistry in Bloomington through November 12, is a musical that many musical theater fans have heard of, but few have seen.

Let's set something straight right away: The title character of this musical is not the Baker's Wife who shows up in Stephen Sondheim's and James Lapine's musical Into the Woods.

This story is based on a 1938 French film and despite being written by Stephen Schwartz (Wicked, Pippin, Godspell), the musical has never made it to Broadway. After a 1976 tour and some recasting, the producers declined to take the show to New York. It was presented in 1989 in London's West End to positive reviews and audience feedback, but closed after just 56 performances. One song from the show, "Meadowlark", has become a cabaret and audition staple, but the show itself is relatively obscure. 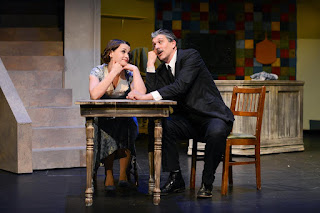 The Baker's Wife opens in an isolated French village in the 1930s where time seems to have stood still. Though the clothes are contemporary and cars exist, the town is reminiscent of the little town in the opening song of the Disney film Beauty and the Beast. Belle would feel right at home. The villagers gossip as they discuss the impending arrival of the town's new baker. Since the old baker died, they've had to travel miles to get their bread, and it's made everyone cranky.

The new baker arrives, and he's a pleasant-seeming middle-aged guy. Even his name is Amiable. But he surprises the town when he turns out to have a beautiful, much younger wife. Genevieve has determined to make the best of her marriage although she doesn't love her husband as he does her. Nevertheless, she runs off with a smooth-talking local, which breaks Aimable's heart, leaving him unable to bake bread. The townspeople decide to interfere and convince her to return, all in the interest of having fresh bread again. 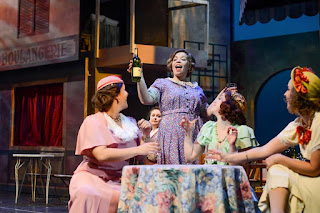 There are some nice tunes in the show, capably sung by the leading players. Bradley Greenwald, always a delight, puts his lovely voice to good use in the second act ballad "If I Have to Live Alone." Jill Iverson sings beautifully as Genevieve, and Aly Westberg is engaging as our guide to the town, though she seems a bit too modern for the time. The orchestra was also in fine form, making the most of the tuneful score.

Overall though, The Baker's Wife didn't work for me as a story. None of the characters have much development, so their actions don't seem to have any motivation at all. There are far too many stereotypical "men vs. women" fights among the villagers, and as my sister noted, there wasn't a lot of warmth or kindness in the play at all.

Sometimes this production feels like two different plays. The villagers are performing broad (very broad) comedy, while the Baker and his wife appear to be in a quiet domestic drama. I didn't feel particularly invested in any of it.

Also, can I just say, it's rather glaring to me when a large-cast musical produced in the 21st century does not include even one person of color.

Several years ago, Artistry was Bloomington Civic Theater, a well-regarded community theater. In recent years, they have begun to bring in accomplished directors, pay their performers, and engage the occasional Equity actor. The ticket prices reflect their upward mobility, but Artistry appears to be still finding its footing and its identity as a theater. I'm glad they are expanding their repertoire and will be interested to see where they go from here.