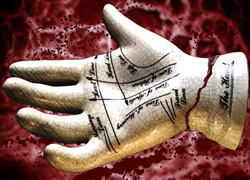 What's It About: "A man from Dorothy’s past has returned to threaten her new marriage. Not even death and dismemberment will stop him from trying to reach her."

A) Hey, this is by Ghoulish Delights, who do the fabulous podcast that I'm currently listening to: The Mysterious Old Radio Listening Society!

B) Hey, how did I NOT KNOW that The Mysterious Old Radio Listening Society were having a live performance at Bryant-Lake Bowl last weekend?

D) This was directed by Paul Von Stoezel, who also directed Black Death: The Musical, which we just saw this week, and who also directed a film that my tenderhearted friend dragged me out of at the Parkway Theater years ago. Worlds converging ... or maybe it's just a small (theater) world after all.

E) If there are bookshelves on stage, I am going to work as hard as possible to try and make out the titles. I'm pretty sure I saw Carter Beats the Devil on the top shelf. Either that, or Katherine Hepburn's Me.

Anyhoo, Severed is about Dorothy, a young married woman with a mysteriously lumpy couch, who reluctantly lets an old boyfriend/accomplice and his new girlfriend into her home, wherein blackmail and worse soon ensue. The show is well acted by Kayla McCarthy, Mike Postle, Matthew Kessen, and especially Kelly Nelson. The script includes nicely subtle symbolism, and the production has some terrific visual tricks. Severed is a great entry in the TCHF. But why didn't the rest of the audience find it as funny as we did? Is it us? It's them, right?

If You're Sensitive and/or Delicate: No worries. Violence takes place offstage, mostly.

In Short: Go see it. Hopefully, you'll have an audience with a goofier sense of humor than the one we had.

Hot Tip: If you get nostalgic, as I do, for the old days of KLBB 1400 and the old radio shows they used to play, check out The Mysterious Old Radio Listening Society. "Each episode features a classic, or maybe-not-so classic story from the scary old-time radio vault, complete with historical notes and nerdy trivia."
Posted by Carly