Twin Cities Horror Festival V: The Not So Silent Planet by Word Sprout 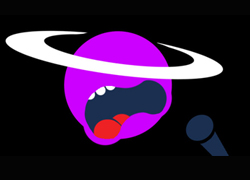 What's It About: "Have you ever imagined a world whose laws of physics differ from our own? Come listen to regulars from the country's ONLY recurring open-mic dedicated to speculative fiction tell you about places of which you've never dreamt."

I love attending things that make me think: "Hey, why don't I go see [insert activity like spoken word storytelling here] more often? Rather than thinking: "Hey, why did I leave the house?"

So happy to report that The Not-So-Silent Planet falls squarely in the former category. Hosted by the charming phillip andrew bennett low, this "Speculative Storytelling Show" gave a lovely introduction to the kind of storytelling events that Wordsprout and Maximum Verbosity put on regularly around town.

A nicely detailed program gives heaps of information about each storyteller and where you can catch them live and online. The stories and storytellers include Tim Wick (of Fearless Comedy Productions), Fox Smoulder (who had a cool fox mask and POSSIBLY a stage name), Ben San Del (who might have had five minutes to tell an engaging ten-minute story), Damian Sheridan (who helped remind me to always bring a hard-copy backup), Rob Callahan (who was terrific), Riawa Thomas-Smith (fun and funny), and Pat Harrigan (bringing it all home with an epistolary tale). Snippets of song and variant lighting created a bit more of a theatrical feel to this bare bones but charming storytelling show.

If You're Sensitive and/or Delicate: Depends on how vivid your imagination is ... bwah hahahahahaha. No, seriously, you'll probably be fine.

In Short: I'd say to go, but it was one of the Twin Cities Horror Festival's one night only shows.

Hot Tip: I love the special thanks in the program which reads: "Thanks to the Twin Cities Horror Festival for both creating and defending a space for this nonsense to happen in."
Posted by Carly