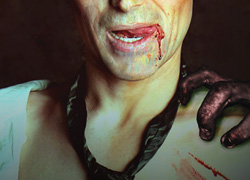 What's It About: "After a car wreck, Brian Smith reluctantly finds himself on an epic quest to find his wife. What is happening to his body? Who is this mysterious voice? And why does everyone say he's dead?"

Zombie Odyssey  is about Brian, a regular guy who is gradually realizing that he might be becoming a zombie. Although it is a solo show, written and performed by Ricky Coates, it never feels like a one-man show. You almost forget that you're seeing only one performer.  The acting, the choreography and Coates's marvelous movement skills are natural and real, but come together to create a truly compelling story. The voiceovers of the people Brian encounters and other audio elements of this show are impeccably timed and expertly performed. Every aspect of this show comes together beautifully.

If You're Sensitive and/or Delicate: There's a bit of nudity and some gory elements, but if that kind of thing bothers you, this is probably not the Festival for you.

In Short: You should go see this.  It's not just good horror, it's good theater.

Hot Tip: Zombie Odyssey is part one of a three-part series of shows that follow Brian's adventures. I hope TCHF brings Coates back again for more zombie Brian.
Posted by Carly