110 in the Shade - Second Fiddle Productions 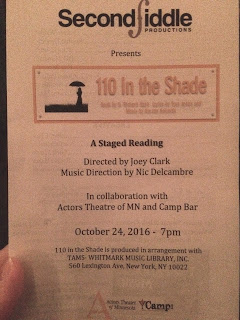 The third and final production of this season for Second Fiddle Productions was 110 in the Shade. Directed by Joey Clark with Music Direction by Nic Delcambre, the show is based on The Rainmaker by N. Richard Nash from the 1950's. This work was also made into a film in 1956, and finally into a fantastic musical in 1963. The score was written by Tom Jones and Harvey Schmidt - best known as the writers of The Fantasticks, most recently seen here in the Twin Cities in an amazing production by Nautilus Music Theater.  As with all Second Fiddle Productions, this was a reading. The actors had their scripts, music stands, and some hints of costumes. No set, no big orchestra, no make-up, just the essentials: actors, music, and the desire to tell a story.

And what a great story. You can read about it on one of the many links above but in short it is about a spinster, a con man, and a town coming together. While it may read like "The Music Man," when put into the hands of Schmidt and Jones - you get a very different feel. Less bombastic, brassy tunes, and more smart, introspective, gorgeous melodies. I have to confess, Schmidt and Jones do not always write music you can hum along with, or music that may linger in your brain. As an actor, I find that you have to spend time with their music to really have it stick. I couldn't stand the show The Fantasticks until I performed in it. I understand the music better, it hums for me, and I felt very similar about 110. That isn't to say that the music isn't good - it is very good. Just to state that unlike many shows where you leave the theater singing a song from it, you may not with this one. The show when first written was very operatic and so it took some cutting down before it played on Broadway in 1963. Luckily even from the start there was one real stand-out tune. You can see it here with the 2007 Broadway Revival Cast (as seen on the Tony Awards).

After the original Broadway production, there was a London production (the only one so far) that played 101 performances. There was a revival at the New York City Opera directed by Scott Ellis, choreographed by Susan Stroman, and with Karen Ziemba in the role of Lizzy. This production was recorded by Jay Records with a nice full orchestra. As with all Jay Record recordings, every note in the score is recorded - from the Overture, to entrance music, underscoring, etc. It is a really great way to preserve a score. The cast for this not only had Karen Ziemba, but also Richard Muenz, Ron Raines, Kristin Chenoweth, and both Tom Jones and Harvey Schmidt! Finally it was revived in a Roundabout Theater Company on Broadway in 2007. It was directed by Lonny Price with designs by Santo Loquasto. Not only did it have Audra McDonald as Lizzie, and John Cullum as her father, it also had Steve Kazee as Starbuck. This production was recorded by PS Classics.

(Sidebar: I have the two most recent recordings and they are both wonderful. I do not have, nor have I heard the original cast recording but it is on my to-do list. There are some great songs and performances on these recordings - totally worth looking into, starting with the 2007 PS Classics album)

So, I know this is more of a write-up about the show itself instead of the amazing cast from Second Fiddle. Honestly - an amazing cast of fantastic local actors and singers. And here is the best thing about Second Fiddle. Not only do you get to see and hear a show live that you rarely have a chance to, but they also get the cream of the crop when it comes to performers. Jennifer Eckes, Doug Anderson, Max Wojtanowicz, Shelli Place, Suzie Juul, Adam Qualls, Elena Glass, Christian Unser..and that is JUST the Ensemble!! Shinah Brashers was spot on in the role of Snookie, Kory LaQuess Pullam was great as File. Bill Marshall, Paul Coate, and Robbie Droddy were all spot-on as H.C., Noah, and Jimmy Curry. Eric Morris - I have no idea why I haven't heard him before but he was amazing as Starbuck. And Therese Walth as Lizzy Curry....here is the thing. I was sitting behind a pillar and so I couldn't see her. Yet I knew exactly what was going on just by listening to her voice. She was fantastic and I look forward to see her, and more of this group of actors soon. And that is one of the best things about Second Fiddle - great local performers doing what they do and love best....telling stories through song and music.

Second Fiddle is gearing up for their fourth season (which I have heard rumors of what they want to do and it will be incredible). While they have received some wonderful grants from the Metropolitan Regional Arts Council, and some very generous donations - you can also make their fourth season happen by going to www.givemn.org and search for Second Fiddle. Give to the Max day is coming up and there are a LOT of local theater groups who could use some love. That is on Nov 17th so take a look and share the love.
Posted by KRL