From the very first notes of Wagner's beautiful overture coming from the super-sized orchestra on stage of the Ordway in Minnesota Opera's production of Das Rheingold, I was IN.

The musicians had to be on stage, since they number about twenty more than can fit into the Ordway's orchestra pit. Director Brian Staufenbiel turns this necessity into a strong production design that fits the material perfectly. Hearing Wagner performed live is an experience not to be missed.

The musicians are periodically behind a scrim, but always in view. When the action starts, the Rhinemaidens frolic in the "pool" of the orchestra pit, with stage fog and watery reflections projected on the scrim to set the scene. This also puts the singers front and center, and it's wonderful to hear the voices so clearly. Mary Evelyn Hangley, Alexandra Razskazoff, and Nadia Fayad sound gorgeous and move beautifully, playfully spurning the advances of the Niebelung, or dwarf, Alberich (Nathan Berg in a fantastic performance), who wants the gold the maidens guard. (The great Anna Russell calls the Rhinemaidens "a sort of aquatic Andrews Sisters" and you really must check out her recap of the opera if you haven't seen it already.)

In the underworld, where the Niebelungen live, the gold gives Alberich the power to control others, including his brother Mime, sung by Dennis Petersen, who is very watchable, resembling Andy Serkis in his almost insectlike costume, herding an adorable bunch of supernumeraries as the other dwarves. 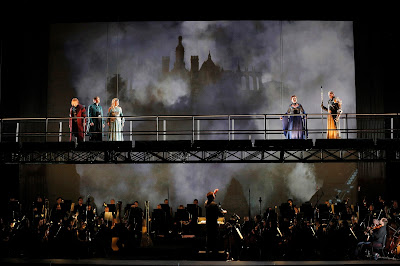 When the story moves above ground to visit the gods in Valhalla, they appear on a high catwalk above the orchestra, placing them physically and vocally above the rest of the cast.

And the cast is outstanding. Greer Grimsby is solid and in charge, and perfectly embodies Wotan, ruler of the gods. His relationship with Katherine Goeldner's Fricka feels affectionate and intimate. Richard Cox as the demigod Loge is a solid presence in his antler-like headgear, even as we doubt his intentions. Late in the opera, the magnificent Denyce Graves emerges as Erda, Goddess of the Earth. She wears a wonderful nature-inspired costume, and I was tempted to start entrance applause for her. I only wished the role were bigger and that we could have heard more of her glorious voice.

The costumes and production design are steampunk-inspired, but not in a gimmicky way. Cameras make the giants Fasolt and Fafner (Jeremy Galyon and Julian Close, both wonderful) seem larger than life. The projections throughout are terrific and really add to the otherworldly setting.

The opera is performed as written, without an intermission, and runs two hours and 33 minutes. Surprisingly, I only saw one person leave their seat during the opera, and I'm pretty sure they were having a coughing fit. The opera's program includes a succinct synopsis and a handy family tree that traces the complicated relationships that proceed through the entire Ring cycle, of which Das Rheingold is only the first of four operas.

If this production is deemed a success, we may be fortunate enough to see the rest of the cycle in Minnesota Opera's coming seasons, and I truly hope that happens. Personally, I love Wagner's operas because of the complex mythology and the fact that things happen, unlike many operas where people just sing incessantly about love. [Editor's note: Some of us like people singing incessantly about love. ;)]

As usual, Minnesota Opera have done a wonderful job of compiling supplementary information on the their website, including photos, costume sketches, and music.

And if you want to know even more about The Ring Cycle, check out the fab documentary Wagner's Ring, about the Metropolitan Opera's recent staging of the entire cycle. It's a fabulous look at a massive production and all of the backstage drama therein.