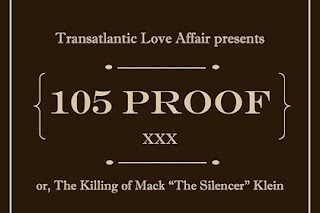 We first saw 105 Proof: or, the Killing of Mack "the Silencer" Klein at the 2015 Fringe Festival. Since then, the show has gotten a bit longer and added a couple of new scenes, but seems to be largely the same show. I'm sure the company is that much more in sync now, which is always a strong point to a Transatlantic Love Affair show.

We LOVE Transatlantic Love Affair. Since seeing Ash Land, we haven't missed a show. The way this company puts together shows is unlike anything else I have ever seen.

The show is conceived and directed by Diogo Lopes, and created by the ensemble. Each actor is a vital element to the show, as an entire world is created from their movement and bodies. Evocative music and sound from onstage guitarist Dustin Tessier and percussionist Adam June (Patterson) and spare but effective lighting designed by Barry Browning help to create a compelling setting for this story.

TLA frequently adapts their shows from classic folk and fairy tales, but they're branching out this time into a quintessentially American story: the humble beginnings and violent rise to power of a bootlegging gangster during Prohibition. According to Lopes's director's notes, he wanted to "explore a genre, popular in movies but rarely seen in theater - the action thriller." 105 Proof follows a young man from Wyatt County, Illinois, as he discovers the money and power available to people willing to ruthlessly exploit people's thirst for illegal alcohol.

The performing company of eight actors create a small town--from the swinging entrance door of the general store, to the rocking chairs on a front porch, to the backyard still--and all of the people who inhabit it. Later on, the action moves to the hangout for Mack Klein's gang in Chicago, populated by tough characters.

TLA core ensemble members Heather Bunch, Derek Lee Miller, and Allison Witham each create sweet sincere small-town characters as well as hired guns you wouldn't want to meet in a dark alley. They are ably joined by Amber Bjork, Emily Dussault, Eric Marinus, Nick Saxton, and Nick Wolf, and all are terrific in their human and nonhuman roles.

105 Proof is darker than the other TLA shows I've seen. The depiction of violence is terrifyingly effective, and the gangsters appallingly amoral. It's a riveting story, told in classic TLA style, but I didn't connect with it on the personal level I have with their other shows. The crime drama isn't necessarily my favorite genre, but of course it's terrific. If you have seen other TLA shows, well, you've probably already got your tickets. If you haven't, it's an exciting introduction to their unique style of storytelling, and will hold the attention of even the least-enthusiastic theatergoers.

105 Proof runs through November 20 at the Illusion Theater. The top ticket price is $27, which is a bargain for the entertainment value wrapped up in this swift, tightly told tale.

If you're wondering about Transatlantic Love Affair, here are our writeups of previous TLA shows:
These Old Shoes
Emilie/Eurydice
The Ballad of the Pale Fisherman

TLA's next show will be in the Dowling Studio at the Guthrie, January 27-February 12, part of their Level Nine series. It's set to be "a reimagining of Hansel and Gretel as a tale of immigration." Not sure what that means, but as always, I'll be there!