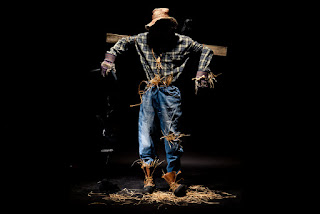 What's It All About:
"Based on the best of campfire ghost stories, Harold is a horrific comedy that delves into the deepest fears of our own imaginations and the animal instincts of the human psyche. Two brothers drive their herd deep into the mountains to graze. Isolated from the outside world, they build a scarecrow for their amusement; Harold. They show Harold amazing kindness and they show Harold amazing cruelty, until one day, Harold starts repaying the favor."


What We Thought:
Here are the things you should know: It's Four Humors, directed by Jason Ballweber, and starring Brant Miller, Matt Spring and Ryan Lear. It's crazy funny and the Four Humors really know how to tell a spooky story. Misdirection, jump scares and amazing sound design add up to an extremely fun campfire story. It's also crazy dark (no, not that way, but lightwise) and made me really think about the use of light in theater. It's wonderfully claustrophobic and hilarious at the same time.  And there's a scarecrow. See it.
Posted by Carly