TCHF VI: After the Party by Erin Sheppard Presents 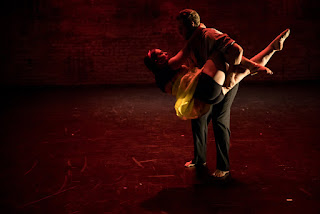 Show: After the Party

What It's All About:
"Pip and Kat meet at a party and declare that only death can break them apart. However, when death comes, Pip discovers that he won't let Kat go after all. From the creators of Bird of Seven Colors comes a ghost story that interweaves dance and dialogue to explore what happens when you are haunted by love."

What We Thought:
True confession: we see a LOT of theater but not a lot of dance, so our dance cred? Not great. That said, I will always see every single thing Erin Sheppard does.

This year's show has a bit more narrative than in years past, with Joe Bozic playing the non-dancing role of Pip to Erin Sheppard's Kat. As old-school musical fans, we were so delighted when Pip and Kat were replaced with dream versions of themselves (see Dream Laurey, Dream Curly from Oklahoma!). The narration, both written and performed by Joe Bozic, is particularly lovely for anyone who loves to read Missed Connections (and this lovely article)--at least in the beginning. It gets a bit darker, of course.

As usual, the music is fantastic, the lighting is gorgeous and the dance is compelling and evocative. The dance ensemble is superb, the costuming on point, and it sustained a dreamlike atmosphere--one in which it would have been nice to view without unnecessary transition applause. (See comic below.)

In short, go see this show. Erin Sheppard is ameeezing and as usual, a high point of the Twin Cities Horror Festival. GO SEE IT. And if you have any ideas of how I can get her to choreograph and soundtrack my life? Let me know.