TCHF VI: Intuition and the Mantis by Rogues Gallery Arts 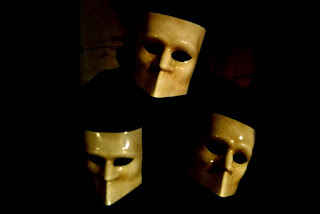 Show: Intuition and the Mantis

What's It All About:
"Danah, an unconventional scientist, believes she has discovered a way to send messages to her past self in the form of foresight or intuition. She also believes the Danah of the future is sending her similar impulses. As those impulses grow darker, she invites over an estranged family member to aid in testing her theories. As she does so strange dark things observe eagerly from the shadows."

What We Thought:
We walked into the theater and were greeted by robed, masked characters standing silently in the aisles. Instantly, the mood was spooky AF. (My inclination was to head back out the door, but theater beckons. Eek.) Written and directed by Duck Washington, Intuition and the Mantis was the most chilling play at the TCHF.

Though seemingly a straightforward play about time travel and foresight, the presence of the mysterious masked ones out in the house among the playgoers was decidedly eerie and unnerving. Of course, things get dark beyond expectations. For an hour-long play at a horror festival, Washington does some amazing world-building. His characters are so beautifully fleshed out, and portrayed so effectively by Adelheid Berg as Danah, Philip D. Henry as her loyal assistant (with his own agenda) and Tim Uren as Danah's brother that it's hard to remember that this was a play performed with only three major roles. (Sidebar, fans of the podcast The Mysterious Old Radio Listening Society will find Tim Uren's voice eerily familiar--he's one of the creators. Also, check out this podcast. It's SO good.) Major props to Washington for creating such a rich, complex female character in Danah. Go see it. Don't be scared by the masked people--unless you LIKE being scared. What a fabulous way to end our massive two-day TCHF binge! Am I still awake?
Posted by Carly