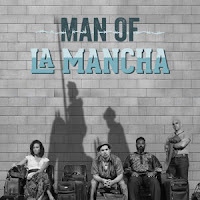 Theater Latte Da artistic director Peter Rothstein knows what his theater does best. They've got a great program for developing new musicals, but when they take on a classic--they give it their own unique and special spin. The new production of Man of La Mancha, playing through October 22 at the Ritz Theater, is a stellar example of their work.

A Broadway hit in 1965, followed by a generally-panned movie version in 1972, tells the story of Don Quixote de la Mancha, knight errant, and his adventures. Except that Quixote is actually a persona adopted by Alonso Quijano, an old Spanish gentleman. And Quijano is a role played by Miguel de Cervantes, who was the writer of the original book Don Quixote.

In the musical, Cervantes is an itinerant actor and storyteller who runs afoul of the Spanish Inquisition. While waiting to be called before the authorities, he tells the story of Don Quixote.
The original musical has a framing device for its play within the play. Generally, this is a 17th-century dungeon filled with assorted prisoners.

For this iteration, Rothstein and scenic designer Michael Hoover have created a modern monstrosity: an ugly cinder-block waiting room where people are being held, with their belongings, for no discernible reason. Whether this is an immigration detention center or some other place, it is cold, impersonal, and dehumanizing. The inmates do not speak to one another, each experiencing their private sadness, fear, or anger.

A guard brings in new people who seem to have not yet had their enthusiasm dimmed by their circumstances. We learn that Miguel de Cervantes and his manservant are traveling performers, and that no one knows how long they may be held. Although the words of the play are unchanged, setting it in this familiar place makes everything feel very immediate for the contemporary audience.

One prisoner, calling himself the Governor (Andre Shoals), states that the new arrival will be tried by his fellow prisoners, forfeiting his belongings if he does not make a good impression on them. Cervantes proceeds to tell the story of an old man, Alonso Quijano, who has become obsessed with knights and chivalry, and adopts the persona of Don Quixote de la Mancha, knight errant. He roams the countryside fighting imaginary dangers--he's where we got the idea of "tilting at windmills"--and righting the wrongs he finds along the way.

Cervantes as Quixote is played by New York actor Martín Solá, who recently appeared in On Your Feet, the Broadway show about Gloria Estefan's life. He sings beautifully, and is perfect in all aspects of his character from the prisoner to the knight to the old man.

Zach Garcia is his ideal foil as Quixote's squire and friend Sancho Panza, touching with a gorgeous voice, and with a sweetness that allows him to sell "I Really Like Him" with utter sincerity. Meghan Kreidler is a perfect Aldonza. Very few actors can sell exasperated (and tough!) with as much charm as she.

The cast, as a whole, are marvelous. In a fantastically strong cast, Jon-Michael Reese (as Paco/The Padre) is a standout. His voice is clear and beautiful, and I hope to see him in many more productions.

Man of La Mancha is not a show that gets revived often, but Theater Latte Da's gorgeous and ingenious production creates a heartrending link to the current day, while still showcasing the beauty and heart of this classic. And they make it look so easy.
Posted by Jules