TCHF VI: The Fae by Special When Lit 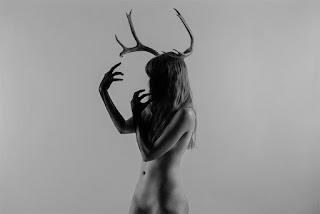 What It's All About:
"On Hollantide Eve, otherwise known as Old Samhain, a group of tourists are seduced into entering a mysterious faerie ring on the Isle of Man. They discover there’s a reason why the Fae were once feared, rather than admired. Based on the old tales of faerie, including nudity and blood, Special When Lit presents: The Fae. Join the dance, if you dare."


What We Thought:
This show begins with Gerd (Linda Sue Anderson) sitting outside a wedding party in the Isle of Man contemplatively enjoying a drink. American brother and sister Darby and Ethna happen along and Gerd tells them to be cautious cause it's the night the fairies come out. Long story short: They don't.

They wander around in the woods with another couple they picked up, Roscoe and Quinn. They hear mysterious music, see mysterious lights, drink from an enchanted waterfall, and then happen upon a fairy ring. Dancing and cavorting with fairies ensues and the siblings ignore every warning they were given by Gerd. Much rapey groping of the Americans ensues, and the fairy queen comes along and sexes Roscoe to death.

Soooo ... the fairies were kind of neat. They have an interesting movement vocabulary and their physicality was the high point of the show for us. There are a couple other high points that other people may enjoy (if you know what I mean--snicker). The Americans were pretty awful, and things picked up much more when the fairies show up. It's an interesting idea, and some of the execution is particularly memorable, but the story falls short.