Wedding Band is the first show of Penumbra Theatre's new season, Sarah Bellamy's first as solo artistic director. But Lou Bellamy is not completely gone from the theater he founded; he directs this moving production with his usual finesse.

Alice Childress, whose play Trouble in Mind was part of the Guthrie's season last year, wrote Wedding Band in 1962, amid the turmoil of the civil rights movement and five years before Loving v. Virginia Supreme Court decision, which overturned laws against interracial marriage in 16 states. The play wasn't performed until 1966 (at the University of Michigan) and had its first professional production at the New York Shakespeare Festival of the Public Theater in 1972.

I'd like to pause here to plug
Penumbra's study guides. Available on the theater's website, the guides present a wealth of background and history for their shows. A play like Wedding Band always makes me curious about the time and place where it's set, and the study guide is a wonderful resource, which I made good use of above.

Set in 1918 South Carolina, the play introduces Julia Augustine (Dame-Jasmine Hughes), just as she moves into rented lodgings behind the house of Fanny (George Keller), who is very proud of being a rare property-owning black woman. Soon, her new neighbors learn that Julia is in a romantic relationship with Herman, a white baker (Peter Christian Hansen). Though they've been together for ten years, they can't legally marry, and his family business keeps him from moving elsewhere. 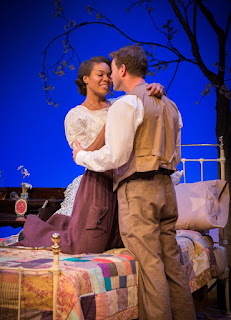 All of the characters have opinions about the relationship, which they don't hesitate to share. The play is full of wonderfully complicated female characters, and the director and his cast bring out their individual qualities beautifully. Julia and Herman have a loving relationship, but it's not free of strife or resentment, and we see how those undercurrents play out in their interactions.

It's fascinating to think of the different time periods that affect our experience of the show. In 1918, the United States had entered into the World War, and characters hope that serving their country will make things easier when the war is over. In the 1960s, when it was written, issues of race and equality were at the forefront of public discussion, and the arguments and problems sound all too familiar in 2017.

Wedding Band deals with a lot of heavy issues, but at heart is a story of ordinary people dealing with the harsh realities of their lives as best they can. And they are people worth spending two hours getting to know.
Posted by Jules