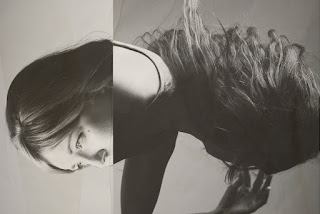 What's It All About:
"Inspired by Ingmar Bergman’s 1966 psychological horror film, Persona, Animus uses performance and multi-media projection to explore the merging identities of two modern women, one who speaks, and one who doesn’t, who compare hands and 'get all mixed up in one another.'"

What We Thought:
Motivational speaker and Instagram star Elisabet Thompson (creator Emily Michaels King) is giving a speech when she has a breakdown.  She ends up hospitalized and cared for by nurse Alma (creator Debra Berger) and psychological drama ensues. The proceedings are recorded (by creator and cinematographer Amber Johnson) and played simultaneously with the live action. The two women head off to the seaside for a mental health retreat where secrets are shared, clothing is changed and things get exceedingly complicated. The relationship between the two women is constantly shifting and evolving, and Berger and King play off each other perfectly.

Animus is moody, atmospheric, intense and unsettling. It's stylish, and the technology perfectly serves the story. This show will keep you thinking long after you leave the theater. Highly recommended.
Posted by Carly