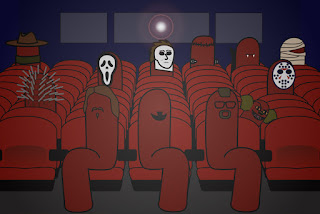 What's It All About:
"Some of the most exciting filmmaking in horror happens 5, 10, or 15 minutes at a time. We scoured the web, film festivals, and even unreleased shorts to bring you five hour-long blocks of our very favorites. These short films will make you laugh, chill your blood, turn your stomach, and might even provoke a tear or two."

What We Thought:
Every single time we go to the Horror Show Hot Dog Short Film Festival at the TCHF I think, dang, I should watch more short horror films. As a huge horror film fan, it's frankly appalling. Thank goodness the HSHD guys are here to help.  The same way that a short story can be beautifully evocative and cutting, a short horror film can provide a near-perfect scare. The line-up for HSHD changes each night, which is awesome. See all you can.

Night Two, when we saw it, featured:

Taste - Directed by Adrian Selkowitz. An ambitious woman strives to impress a television producer but her plans go awry when a naked woman is found in her driveway.

20HZ - Directed by Chris Keller (probably not the fictional character from Oz as portrayed by Christopher Meloni). A songwriter tries to track down a mysterious sound in her home. Includes a scene with shades of my favorite episode of Tales from the Dark Side.

Kisses - Directed by Sean U'Ren. Freaky and disturbing and involving a mannequin. This never ends well.

The Armoire - Directed by Evan Cooper. Technical issues impaired our ability to watch this short, but I love how intently the whole audience was watching a frozen scene to see something, anything happening.

Earworm - Directed by Tara Price. Genius and I had to watch it through my fingers. That is all.

Even the Darkness Has Arms - Directed by Chris Bavota. Sometimes all you need is some really scary as heck imagery. Also, that title rocks.

Caravan - Directed by Nathan Lacey. Despite almost indecipherable Aussie accents and a caravan which was Tardis-like in its dimensions, this film was creepy and complex.

After a day of horror theater that was enjoyable but not scary, this was the perfect way to get our scare on.